We’ve had this pact with Peru, Columbia, Bolivia and Ecuador for 16 years. They send goods to the U.S. duty-free.In exchange, they’re supposed to crack down on the production of cocaine and other drugs. It’s a rosy deal for a country like Ecuador. Ecuador provides a quarter of the roses sold in this country. Mary Stucky reports.

Mary Stucky: Some 65,000 people in Ecuador, many of them women, work in flower fields and greenhouses like this one. . . .

Here at the Malima Flower Plantation workers use rubber gloves to strip leaves from flower stems. They’re packing the flowers in boxes and stacking them 6 feet high. Next stop, the airport and planes bound for Miami.

There are 180 workers on this farm. One of them is Elvia Ordonez.

Elvia ORDONEZ [interpreter]: The work at the flower farm is very important for us. These flowers maintain us. They feed us.

The United States originally called for the duty-free arrangement with the Andean countries to be replaced by a permanent free-trade agreement. But leftist presidents in the region, including Ecuadorian President Rafael Correa, oppose free trade.

MANUEL CHIRIBOGA: Basically it has to do with how people feel about the United States in the sense that they see it as a big country, sometimes as a bully pushing small countries around.

Some Republicans in the U.S. wanted to punish Ecuador for its stand against free trade by ending the duty-free deal. But that could mean more illegal immigration to the United States. Flower workers live in regions where their only choice used to be leaving the country in search of work. Chiriboga says the availability of flower jobs changed that.

CHIRIBOGA: Right now there are regions where people go to work. A number of small businesses have developed to sell all kinds of things.

Not just in Ecuador. Also here in the U.S. Most products from Andean countries arrive through the port of Miami. Though many workers would prefer a two-year extension of the duty-free deal to one lasting another eight months, for now, the future is at least looking a little rosier. 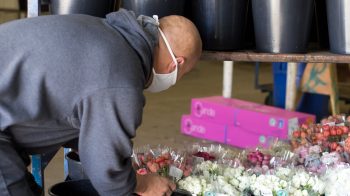