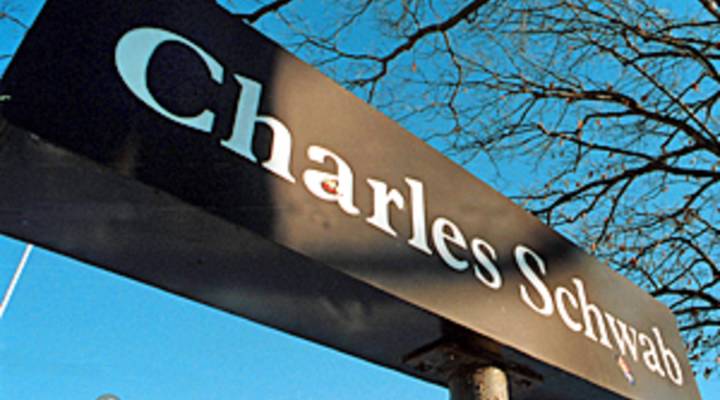 Chuck wants to bond with investors

Chuck wants to bond with investors

TESS VIGELAND: They seem a little bland, but bonds have been getting investors excited recently. Higher yields prompted buyers to get back into treasuries.
Of course that’s not good news for folks hoping to get a mortgage.

But one problem with bonds has been that it’s nearly impossible to figure out what they really cost you. So in response to a lot of cajoling from regulators, many brokers are revamping their fees. And this week, Charles Schwab joined the list.

Marketplace’s Janet Babin is here to explain
Janet, what’s going to happen now if you “Talk to Chuck?”

JANET BABIN: Well, they’re gonna change the fee structure for bonds in a way that will make it easier for people to know what exactly they’re buying. Most of the time before, when customers would buy a bond, they wouldn’t really have a price breakout. So you weren’t quite sure how much you were exactly paying for the bond. And another thing the company did, Schwab is gonna lower the prices for most people. Some investors will end up paying more but on average, you’ll pay about a dollar per bond trade online.

VIGELAND: So it sounds like this is very similar to the controversies that we’ve had over fees for stock trading. That they were very opaque, that you couldn’t understand where the fees were. And it sounds like that’s kinda being translated into bond trading now.

BABIN: That’s right. It was all about the commission, or they call them the mark-ups – you know, the actual price to trade. And I think a few years ago, there was some research done and people figured out that bond trades were actually costing people a lot more than stock trades. But nobody really knew it. So now there’s more transparency in buying a bond for an individual investor.

VIGELAND: So transparency is obviously one benefit. How else are investors benefiting from some of these changes in bond-buying?

BABIN: I think the changes are helping to demystify this process of buying bonds. And individual investors are probably going to be adding them to their portfolios. I mean if you think about the baby boomers, they really need bonds in that strategy, because all investments are risky but bonds can be less volatile than stocks, right? So they are something you do want in a long-term portfolio. But with all these barriers to figuring out how much a bond costs, it was impossible for people to know what they were buying. And you know Tess, it’s hard to believe, but just a few years ago, the prices bonds traded at were not available to the public.

VIGELAND: Wow. So you would do a market report and you wouldn’t have the bond prices.

BABIN: Exactly. You can imagine how hard it would be for people who didn’t buy bonds every day if you weren’t a trader and you didn’t know what the spread was for a bond, the bidding price or the asking price or whatever. But now, there’s been some regulatory changes. And so all those prices do have to be listed. And it’s easy now for people to go to various Web sites and figure out how much the bonds are trading for.

VIGELAND: All right. Marketplace’s own bond queen, Janet Babin. Thanks so much for helping us out.