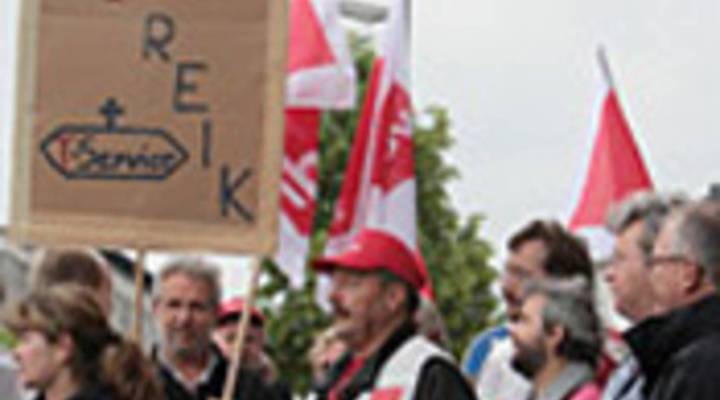 Striking Deutsche Telekom workers strike in front of a T-Com outlet in Essen May 11. About 11,000 workers are expected to join the strike. Volker Hartmann/AFP/Getty Images

Striking Deutsche Telekom workers strike in front of a T-Com outlet in Essen May 11. About 11,000 workers are expected to join the strike. Volker Hartmann/AFP/Getty Images

TEXT OF STORYLISA NAPOLI: There is nothing unusual about unhappy workers who don’t think they’re making enough money, but the trouble’s been particularly intense these past few months in Germany. This is typically a time of brief strikes by employees in order to get employers to compromise on pay hikes, but Ethan Lindsey reports from Berlin that this year there’s more than money at stake.

In fact, economist Michael Fichter at Berlin’s Free University says unions deserve a lot of the credit for Germany’s miraculous growth since 1945.

In the post-war reconstruction, workers saw an opportunity to consolidate their power.

MICHAEL FICHTER: The labor unions in both East and West Germany had political demands from the very beginning. That has contributed very strongly to the economic development of Germany, and even among social scientists is given the name “the German Model.”

The German Model requires employers and employees work together. In Germany workers don’t just sit at the negotiating table, they sit at the boardroom table. By law, they get half of the votes in all boards of directors.

But now the German Model may be finally showing its age.

One reason is that the powerful labor reps in the boardroom are accused of using their positions to pad their wallets.

At Volkswagen, an executive has been charged with bribing a high-ranking labor leader, and a corporate scandal at Siemens is dominating news headlines.

[ TV REPORT: And the Siemens scandal continues to have political ripples here in Berlin, as departing CEO Klaus Kleinfeld spoke to lawmakers . . . ]

The CEO of Germany’s most well-known engineering firm was forced to step aside amid allegations that labor took more than $40 million in bribes to vote with management.

The German Model is also threatened by globalization. Thousands of low-skilled, formerly union jobs have left the country in recent years.

Horst Mund is the international head of IG Metall, one the country’s most powerful unions. He says German workers will soon have to make a decision about how to reorganize.

HORST MUND: At the end of the day we have no choice but becoming global. If in the form of a global union or in the form of global networks of independent unions, that remains to be seen.

But as German labor unions try to redefine themselves in the face of corruption and globalization, German business now smells blood in the water.

In fact, some executives have proposed reducing the number of labor reps on corporate boards — or follow the American model and kick them out of the boardroom completely.