TEXT OF STORYMARK AUSTIN THOMAS: The Marketplace Morning Report comes to you from the Frank Stanton studios in downtown Los Angeles. That phrase “downtown Los Angeles” often draws snickers. It’s because LA doesn’t have a center the way other cities like, say, Chicago do. But a group of civic and business leaders want to change that. They’ve secured some city-owned property along with $66 million in tax deferrals to build on it. It’s called the Grand Avenue Project and as Pat Loeb tells us, developers hope this is finally the critical mass that will give the city a true downtown.

PAT LOEB: Los Angeles is unlike any city in the world. The beaches, the mountains, Hollywood . . .

ELI BROAD: I think no city in world history has really been great without a vibrant center.

Broad spearheaded the effort to build the Grand Avenue Project and engaged Bill Witte of Related Companies as the developer.

BILL WITTE: The corner of 2nd and Grand will be a 50-story tower, with 250 condominiums over a Mandarin Oriental hotel.

Witte is looking at a dilapidated parking garage, but he’s envisioning the glass tower Frank Gehry designed for the site. It’s across the street from the Disney Concert Hall, near the Center Theater Group, City Hall, the Museum of Contemporary Art . . .

Hmmm. L.A. already has a downtown.

BROAD: It’s all building to a crescendo. The best is yet to come.

Peter Gordon isn’t so sure.

PETER GORDON: The concept of the big downtown is dated. And the idea that we can have one of those in Los Angeles is not plausible.

Gordon teaches at the University of Southern California. He says L.A. was built on a newer model — one that takes cars into account. It has many different centers throughout its vast geography.

GORDON: When you hear people parade their idea of a vision, then you know, you may want to put your hand over your wallet.

Gordon says the fact that tax breaks are needed is an indication that the private market thinks the project is risky.

WITTE: This is not just a building or a couple of buildings. The whole is greater than the sum of the parts, they engage the public a lot more than just residential buildings alone and I think it will begin to help connect east, west, north and south.

But will it give L.A. that elusive “there” there? Stay tuned. Construction is scheduled to be complete in 2010.

THOMAS: And from downtown Los Angeles, I’m Mark Austin Thomas. Thanks for joining us. Have a great day. 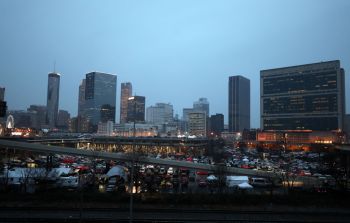 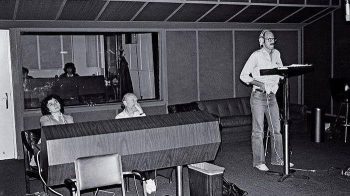