AstraZeneca pays to play in biotech

AstraZeneca pays to play in biotech

KAI RYSSDAL: Working our way down the merger lists, we come to AstraZeneca. The U.K.-based pharmaceutical company — Crestor is its blockbuster cholesterol drug — is gonna pay 15 and a half billion dollars for MedImmune out of Maryland.

MedImmune makes the inhaled flu vaccine FluMist. And its shares ran a fever today.Investors will get a 21 percent premium on Friday’s close. Which is prompting some talk that the price offered was too high. Helen Palmer reports now from the Marketplace Health Desk at WGBH in Boston.

HELEN PALMER: AstraZeneca’s painting this deal as very positive. It points to MedImmune’s revenue last year — $1.3 billion — its pipeline of drugs in development, and potential efficiency savings of half a billion dollars a year.

Andrew Casper, an analyst with the pharma newsletter “The Pink Sheet,” says MedImmune will also bring valuable expertise in biotech.

ANDREW CASPER: They’re going to get all this capacity and experience that MedImmune has in manufacturing biotechnology products.

Casper says big pharma companies want to get in on biotech drugs because they’re so lucrative. They’re harder to manufacture, so they command higher prices — and, so far at least, there are no generic biologic drugs.

CASPER: Because of that, you have relatively high-margin products, where you’re selling it to relatively few customers at very, very high prices.

LES FUNTLEYDER: It does help them. The question is, is this the right price to have been paid for that amount of help?

Miller Tabak analyst Les Funtleyder says it won’t be clear whether this was too high a price for a few years. But paying such a high premium is risky.

Still, one group breaking out the champagne today is MedImmune shareholders. Like David Katz of Matrix Asset Advisors.

DAVID KATZ: We think, ultimately, it’ll be a good deal for AstraZeneca. But it’s a great deal for shareholders today. And we think also it will be good for patients that use the MedImmune products.

Meantime, anyone else looking to buy a small biotech company should expect it to cost an arm and a leg. 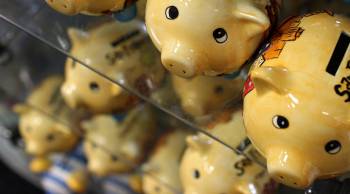