Congress wants a look under the couch cushions

Congress wants a look under the couch cushions

KAI RYSSDAL: You know, money’s tight everywhere. From individual bank accounts to government coffers. So the Internal Revenue Service is promising to do the Federal equivalent of looking under the couch cushions for spare change.

IRS Commissioner Mark Everson trekked up to Capitol Hill today to explain what the IRS has been doing to close a more than $345 billion tax gap. Marketplace’s Hillary Wicai reports.

HILLARY WICAI: As he concluded his annual remarks to the House Ways and Means Oversight Subcommittee, IRS Commissioner Mark Everson admitted there’s a lot we don’t know about the tax gap — like how big it really is.— Congressman John Lewis of Georgia chairs the subcommittee.

JOHN LEWIS: Three forty-five is an old number and it’s probably much higher.

Commissioner Everson testified today that audits are up. He said preliminary estimates show the IRS audited 12,000 more businesses last year than in 2001.

But observers say the IRS is still playing a game of catch-up. The number of enforcement staff at the IRS is about 17 percent less than it was a decade ago.

COHEN: We used to audit 3 to 4 percent of returns. They’re auditing something on the order of less than 1 percent now.

Congressman Lloyd Doggett of Texas questioned how much time auditors get to do their jobs. He says the IRS’s goal of spending less time per audit means cases are closed before all taxes owed are collected.

Eric Toder with the Urban Institute says that could mean either greater efficiency or less intensive audits. And that may not be all bad. He says there’s a case to be made for so called light-touch audits.

ERIC TODER: To the extent that the IRS can make its presence felt by more audits it might encourage more people to . . . they have a higher chance of being audited and that might increase the chance of voluntary compliance.

Still other critics point out the real problem is the complex and growing tax code. They argue to cut down on tax cheats — simplify the tax code. 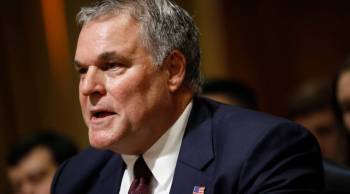 An IRS commissioner at last?