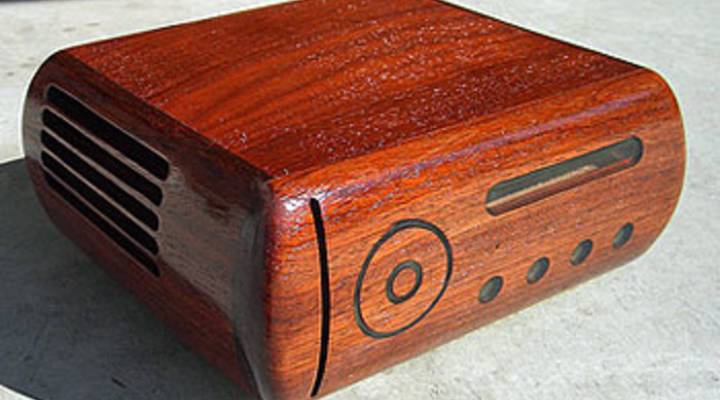 Going against the grain

Going against the grain

KAI RYSSDAL: Wal-Mart and everybody else are still trying to figure out how to profit from all the changes the digital economy’s brought. Movie downloads are just one example.

But the simple plastic box at the heart of it all has been overlooked by most of us. Who cares what the outside of your PC looks like as long as it’s got a fast chip inside, right? Well, Ethan Lindsey found some people who do care.

[Sound of a table saw]

ETHAN LINDSEY: That is the sound of the next big thing in the computer business being built.

, a German company that sells computers built out of wood.

Company owner Nicolas Schmidt says 12 years ago, he had an idea to make his computers match his furniture. He says at first, people didn’t quite get it.

NICOLAS SCHMIDT: For our first nine years, the question was always, why? Why does somebody need this?

But in the past three years, Schmidt says business has really started to grow.

He explains that he doesn’t build the computer chips inside of your desktop. He builds retro computer cases that look like something out of the TV program “Antiques Roadshow.”

Schmidt sees himself like one of those guys who makes a living customizing and “tricking out” cars. Only with computers. He says today’s customers feel that their computers, much like their cars, say something about who they are.

goes by the name “Zapwizard.” He’s what’s known as a modder. Someone who modifies his home computer. He’s so into the wooden computer idea, he built one himself.

JOSHUA DRIGGS: Runs along the same lines as anybody doing custom cars, custom motorcycles. Any type of custom work where you involve a lot of art with a lot of technical skill.

Nelson Gonzalez is the CEO of computer maker Alienware.

NELSON GONZALEZ: Well, it’s interesting. We started out as hot rodders, right? So there’s a car analogy. We started off as hot rodders. And now we’ve been able to design our own products, if you will, our own chassis. So that makes us more of like a Ferrari or like a Porsche. It’s really interesting how we’ve kind of grown up throughout the years.

Gonzalez started his company in the mid-90s as an excuse to make money while playing games and tooling with computers. But his business proved to be a success financially as well.

Like auto freaks and their car shows, computer geeks have network parties.

Every year, thousands of modders and gamers meet at the biggest network party of all: QuakeCon

, in Texas. It’s where hardcore gamers show up, along with their own computers. And then connect all their computers together on a network to play games against one another.

Nowadays, on the fringes of QuakeCon are reps from Dell and HP looking for the cool new thing. Driggs sees them as party crashers.

DRIGGS: Custom computers, and to some point modding, has become mainstream. To the point that you can’t go to CompUSA and buy a beige box anymore.

But Schmidt, the German wood computer maker, says modders like Driggs have no idea how mainstream it’s already gotten.

Schmidt notes that 12 years ago, he was struggling to find buyers. But now, just take a look at the names on the top of his customer list.

SCHMIDT: And I know that Hillary Clinton have a system from me.