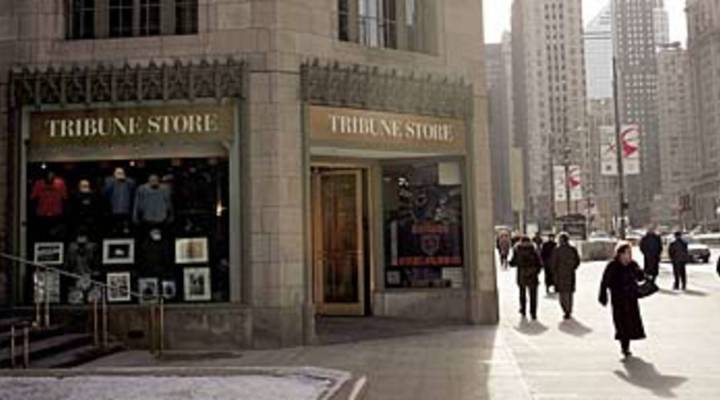 KAI RYSSDAL: Time Incorporated made some news of its own today.

The publisher of Time Magazine, Sports Illustrated and 150 other titles announced big layoffs. It’s closing the Time bureaus in Atlanta, Chicago, and here in Los Angeles. About 300 job cuts in all.

But as troubled as magazines might be, they’ve got nothing on newspapers. Falling circulation has led to stock prices doing the same thing.

Perhaps nowhere more publicly than at the Tribune Company. Owner of the paper of the same name, two dozen television stations, the Chicago Cubs and the Los Angeles Times. Last year, the company put itself up for sale.

The bids are finally in, and I guess you can say offers weren’t what Tribune shareholders were hoping for.

TESS VIGELAND: The Tribune Company got three bids. One was from its largest shareholder, the Chandler family. A second came from Los Angeles billionaires Eli Broad and Ron Burkle. The third was from a private equity firm just interested in Tribune’s TV stations.

None of the bidders offered what Tribune shareholders wanted: to pay a premium for the entire company, which is valued at $13 billion.

Jarvis says Tribune probably turned down all the offers. But that just delays the inevitable.

JARVIS: The Tribune Company as we know is going to going to disappear in one form or another, and it may be sold off piece by piece, it may go private. But Tribune Tower, as a symbol of what the company is, is crumbling before our eyes.

Newspapers are losing readers and advertisers to online competitors. That’s profoundly unsettling for an industry used to enjoying a monopoly.

Media business expert Rick Edmonds is with the Poynter Institute.

RICK EDMONDS: It probably is making it difficult for reporters, editors, designers to do their best work. One of our national board members sort of sampled some newsrooms. Thought the one-word description was panic.

Tribune’s board is expected to consider the offers at a meeting in Chicago on Saturday.