KAI RYSSDAL: The highs and lows of a given part of the economy aren’t something that are just announced one day. Forget the stock markets or oil. People pay what they’ll pay for commodities or equities.

Think about something like housing. Economists spent hours poring over data to figure out when the bubble would burst. Never mind that they never quite got it right. But now that the boom is over, when’s it going to hit bottom?

That question’s been out there for months. And today two of the country’s biggest homebuilders, Centex and KB Home, gave us a sign. Both said they’ll report disappointing earnings for the fourth quarter.

Marketplace’s Alisa Roth has the story from New York.

ALISA ROTH: Land is what’s causing a lot of the problems for homebuilders these days. Too much of it.

ERIC LANDRY: There was virtually a race for land throughout all the hot areas in the country.

That’s analyst Eric Landry. He follows homebuilders for Morningstar. He’s talking about places like Las Vegas, Phoenix, Southern California, and much of Florida. That’s where homebuilders, speculators and homebuyers had been having a field day.

The bonanza’s clearly over. And Landry says we still haven’t hit the bottom in a market saturated with supply.

LANDRY: Until the overall market sops up all of those excess units, there’s gonna be a problem with new home construction.

But Nicholas Retsinas, who directs the Joint Center for Housing Studies at Harvard, says he thinks the worst is over.

NICHOLAS RETSINAS: The signs are that we are near the bottom. The not-so-good news is we may be hanging around the bottom for a little while.

He says one of the big problems is that during the boom, buyers got used to oversized returns on their investments. Now, buyers are apprehensive.

RETSINAS: Gee, if I buy a home now, could I have gotten it less tomorrow? And they’re waiting to see whether in fact the market is stabilizing.

He says the next few quarters will probably be rocky, but things might start to improve again after that. And he promises the longer-term outlook is pretty good. 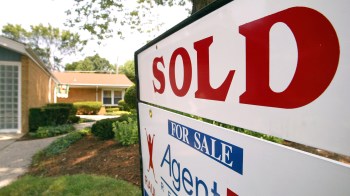