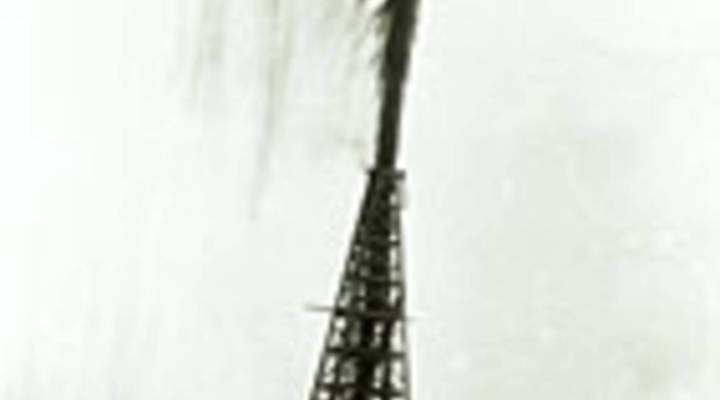 The famous Lucas Gusher blows out oil January 10, 1901 on Spindletop hill in Beaumont, Texas. The first in Texas, it sprayed over 100 feet above the derrick for nine days until the well was capped. Texas Energy Museum/Getty Images

The famous Lucas Gusher blows out oil January 10, 1901 on Spindletop hill in Beaumont, Texas. The first in Texas, it sprayed over 100 feet above the derrick for nine days until the well was capped. Texas Energy Museum/Getty Images

MARK AUSTIN THOMAS: This is a good time to open up the Marketplace vault and take a look at this week in the History of Business. And we find the first taste of Texas Tea.

STACEY VANEK-SMITH:This week back in 1901, a prospector struck oil near the city of Beaumont, Texas.

The gusher produced about 100,000 barrels a day. It was the first major oil discovery in the U.S.

Beaumont became a black-gold boomtown as people flooded in, hoping to strike it rich.

By 1902, hundreds of oil companies had set up shop near Beaumont, including the likes of Exxon and Texaco.