MARK AUSTIN THOMAS: We’ve heard about seemingly every kind of biofuel under the sun. Ethanol made from corn, biodiesel from french fry grease, you name it. But there’s a little known cousin in the biofuels family that may be turn out to be the best alternative to gasoline yet. It’s called biobutanol. And as Sarah Gardner reports from the Marketplace Sustainability Desk, it’s attracting the attention of some very big corporate players.

SARAH GARDNER: Ohio inventor David Ramey has been singing biobutanol’s praises for years, but nobody paid attention. Until last summer, that is, when he put it in the tank of his ’92 Buick Park Avenue and drove cross-country on it.

DAVID RAMEY: It just outperformed gasoline mile after mile after mile. I climbed Mt. Palomar and we didn’t even have to downshift. The thing absolutely climbed right up the hill.

Petroleum-derived butanol has been sold as an industrial solvent for years. But corn, sugar beets and other crops can also provide it so presto! you have biobutanol.

Mark Gulley is a securities analyst who covers DuPont. He also knows his way around a molecule.

MARK GULLEY: Ethanol is a C2 molecule, two carbon atoms and butanol’s four. What that means is that it’s a heavier molecule, more directly similar to gasoline than would be the case for ethanol.

As a result, biobutanol blends more easily with gasoline. It also gets better gas mileage than ethanol.

Last Spring, biobutanol got a big boost when DuPont and British Petroleum decided to invest in it.

TOM CONNELLY: We’ve started to make laboratory quantities of biobutanol today and in parallel with this our partner BP has begun fleet testing of vehicles using biobutanol.

And, here’s why this alternative fuel is so compelling to an oil company like BP: Unlike ethanol, biobutanol can be transported through existing fuel pipelines.

Daniel Kammen is co-director of the Berkeley Institute of the Environment.

DANIEL KAMMEN: Pipelines are obviously much less expensive than sending everything in trucks. So, that’s a big plus if you want to think about a big butanol economy and a big future.

So, butanol can use the existing distribution network, it’s less evaporative, gets more miles to the gallon and blends more easily with gasoline. Why are we even talking about ethanol?

KAMMEN: ‘Cause for one thing it stinks.

CONNELLY: Ethanol is a cheaper fuel to produce at this moment and in order to fully exploit biobutanol commercially, we need to reduce the production costs.

That’s one reason DuPont wants to make sure biobutanol gets similar government subsidies to ethanol.

The ethanol industry swears it won’t stand in biobutanol’s way. Bob Dineen is president of the main trade group for ethanol.

BOB DINEEN: It may be that the companies that I’m representing today could be biobutanol producers in the future.

DuPont and BP plan to start converting sugar beets into biobutanol at a British facility next year. Let’s hope the plant’s neighbors in Wissington, England don’t mind the smell. 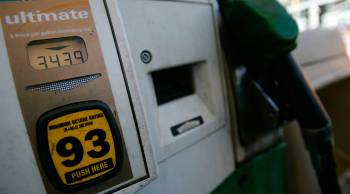