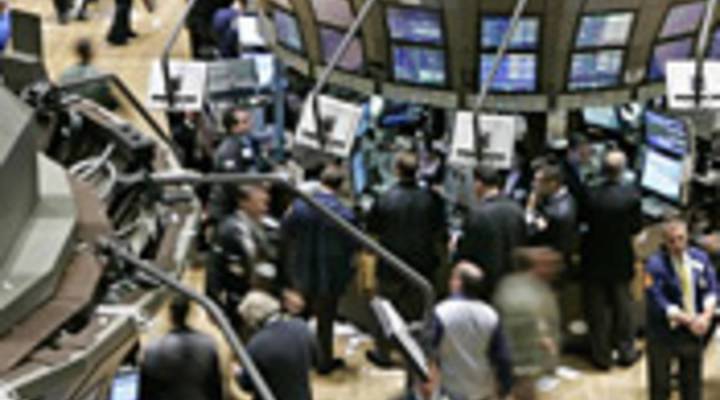 Trading the floor for the computer

Trading the floor for the computer

KAI RYSSDAL: 2006 was quite a year on Wall Street. Record highs, as we’ve told you about. The New York Stock Exchange merged with an electronic trading company. Went public too. It’s a for-profit institution now. Which has meant some big changes on the trading floor. Marketplace’s Stacey Vanek Smith reports.

And in every direction specialists, traders, brokers and clerks. But to Seaport Securities President Ted Weissberg, it’s eerily calm.

TED WEISSBERG: We’re going to trade a billion-four today, but look at this, you could play shuffle board in here.

Weisberg has worked on the floor for more than three decades. He says he’s noticed a big difference since the NYSE went public last year and merged with electronic trading firm Archipelago.

But since the merger, the Big Board has introduced a “hybrid market,” embracing an electronic system that largely cuts out specialists and brokers. It’s faster, it’s cheaper and it’s booming.This is how the trading floor of the future sounds. . . . Silent.

ALISTAIR BROWN: At any other trading desk, you’d hear the phone going, people taking orders. I’ll leave that to them. We just do it electronically.

BROWN: Ah, it’s only 10:40. We have done well over 300 million in a day. It’s a lot more than pretty much all the companies you’ve actually heard of.

In the electronic trading landscape, investors pick their price and click. And the name of the game is speed. So Brown says trading is shifting away from market experts and toward tech experts.

BROWN: We’re basically a software company. The reason we’re successful is we’re just built from the ground up for speed. When things go crazy, if you’ve got stale data, you’ll lose a lot of money. If you’re looking at data that happened 10 seconds ago, you’re dead.

More and more investors are opting for the high-speed world of e-trading. Now that the NYSE is owned by profit-hungry shareholders, many say the costly floor is poised to go the way of the steam train. It’s already laid off nearly a fifth of its employees.

JORDAN GOODMAN: It’s faster, it’s cheaper, it’s more transparenta€¦ and I think it’S gonna really be good for investors. To some extent, the floor is becoming an anachronism.

Hugh Johnson is chief investment officer of Johnson Illington Advisors. He owned a seat on the exchange for the better part of a decade. He says the floor still has an important place.

That’s because specialists and brokers provide a certain amount of stability to the markets. Without them, says Johnson, things could get pretty out of whack.

HUGH JOHNSON: It’s wrong for folks to say: Humans making decisions, there’s no place for it. Well, there is a very substantial place for it. And you don’t want to lose too much of that. And you may lose some of that in an electronic trading environment. And what it’ll lead to is a little less liquidity, a little more volatility and a little more risk.

Johnson says that potential for increased risk could actually cause people to shy away from investing in the markets. But investors may not see it that way for now. Big traders like Credit Suisse and Wachovia have been cutting back their presence on the floor. Many independent companies have left the floor altogether, because it’s gotten too expensive for the amount of business it brings.

But at the New York Stock Exchange, veteran broker Ted Weissberg says he thinks the floor will find its place in the electronic age.

WEISSBERG: I tend to think both electronics and physical trading can exist side-by-side. My guess is, the floor will not disappear in spite of all the nay-sayers. But of course, only time will tell.

And with the markets expanding and forming alliances with overseas exchanges, investors may need the human touch more than ever.

On the floor of the New York Stock Exchange, I’m Stacey Vanek Smith for Marketplace.