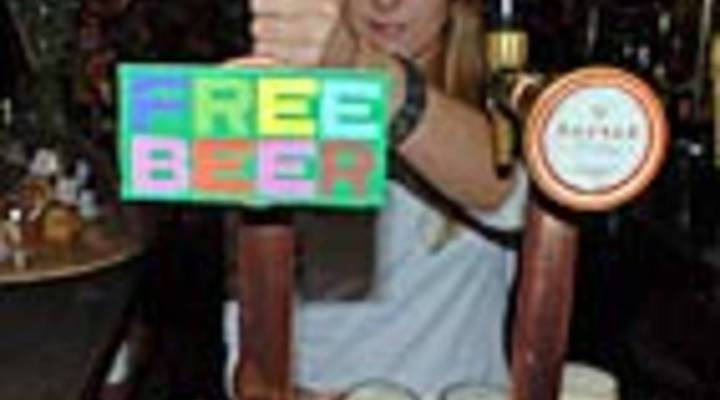 Woman pours a Free Beer from a tap. Courtesy of FreeBeer.org

Woman pours a Free Beer from a tap. Courtesy of FreeBeer.org

BOB MOON: It’s already a fact that even a legit DVD that you buy overseas might be digitally “locked” when you get it home so it won’t work at all on a player sold here in the U.S. There’s a big movement around the world to unlock those kinds of restrictions and promote the “free” in “free enterprise.”

In the computer world, for example, there’s been a push to replace costly Windows-based programs with so-called “open source” software. And that “open source” movement doesn’t just involve computers, or music, or DVDs.

In toasting the New Year this weekend, you might consider downloading the “code” for free brew. We strong-armed reporter Ethan Lindsey into tracking down the source in Copenhagen.

ETHAN LINDSEY: So, a few weeks ago, Marketplace asked me to report a story on free beer. It took me, oh, about a half a second, to agree to do it.

The first thing I did was track down the brewers to their offices in Copenhagen. There I met Rasmus Nielsen, one of the creators of the so-called Free Beer, and I got right to the nitty gritty:Where is the free beer? And, more importantly, how much can I take?

RASMUS NIELSEN: Free Beer? It costs the same as other sort of home-brew beer.

That’s when Nielsen explained to me that he’s an artist, a member of the art group Superflex. And Free Beer doesn’t mean free, as in free of cost. Free Beer means that anyone in the world can brew it using the same recipe, bottle it with same labels, sell it, and keep all the profits for themselves.

Just think of what would happen if you started to make a Coca-Cola knock-off, bottle it in Coke bottles, and sell it.

Nielsen says he first started brewing Free Beer as a way to make a statement about copyright law.

NIELSEN: It wasn’t like a natural interest. Copyright law is very nerdy — basically deals with ideas of what’s yours and what is mine.

As an artist, Nielsen says a couple of years ago he started to bump up against copyright law over and over again. And he says doesn’t like how corporations have so much power over ideas and intellectual property.

Just as he was grappling with these ideas about copyright law, there was another group dealing with a similar question. Software programmers around the world were chafing under the monopoly power of Microsoft. In response, they developed programs like Linux — free to change and sell and even profit from as long as you didn’t restrict the ability of anyone else to do the exact same thing.

Richard Stallman helped create a key piece of the operating system now known as Linux. He’s considered the father of the free-software movement. To Stallman, free software is a political struggle. It’s a question of preserving your and my intellectual freedoms from big corporations. And he thinks the free beer idea can help spread the gospel.

RICHARD STALLMAN: Now, a recipe for beer can be free in the same way that software can be free. They are both works that serve a practical, functional purpose. You use them to get a job done. That’s the point that they’re making, and I think it’s a good point.

Still, Stallman sees one problem. To make a copy of Linux doesn’t require another bottle or more hops, like every copy of beer does.

Yale law professor Yochai Benkler says that’s true, bottles and hops will still cost the same amount. But the savings from shared recipes and shared ideas may be enough to make Free Beer a worthwhile idea.

YOCHAI BENKLER: Almost all goods have some information component. The limiting question of whether Free Beer will or won’t ultimately compete in the beer market depends on the economics of converting a recipe into an actual mass-produced and distributed beer.

One brewery in Denmark has already started to sell Free Beer on store shelves. It quickly sold out its first batch. Breweries in Italy and Califorrnia may follow. And Nielsen says about a hundred home brewers around the world have downloaded the recipe for personal use.

He hopes Free Beer’s popularity proves that open-source development can help make better and cheaper products, even physical ones like cars or pharmaceuticals.

But, for me, in the end, I still wanted to score some free beer.

LINDSEY: You said you have some here. Is there a way I could taste the beer? Is that possible, or . . . ?

LINDSEY: I thought it was free beer!

OK, wait. Four dollars? I still don’t understand? I thought I was gonna get some free beer out of this.