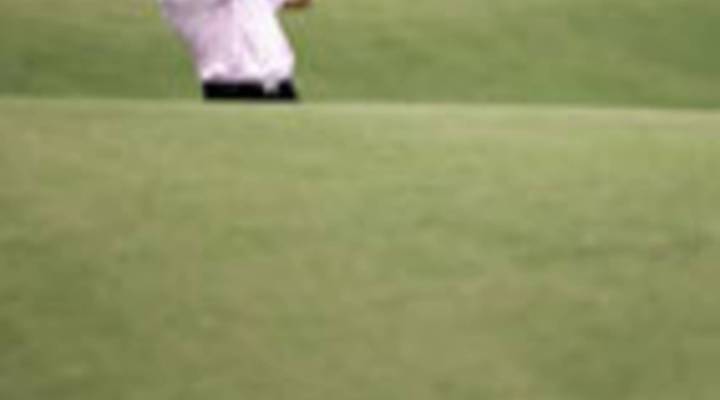 PGA tries new hook for a larger slice of audience

PGA tries new hook for a larger slice of audience

TESS VIGELAND: Spend enough time in the news business and you’ll find that the same stories just keep coming ’round. Just with different twists . . . or players. About 10 years ago when I was a sports reporter I remember doing a story about the pro tennis tour. The U.S. Tennis Association launched a big marketing campaign to get people interested in the sport. Because so many were leaving tennis for golf.

Well, here we are a decade later in the Tiger era and apparently golf now thinks it needs some marketing help. The PGA is launching what it’s calling “A New Era In Golf.” It kicks off on January 4th with a tour called the FedExCup.

But golf’s premier player hasn’t said yet whether he’ll tee up. Our business-of-sports analyst Ed Derse is here.

VIGELAND: First, let’s talk about this new tournament or tour or series of matches. How’s this gonna work? It sounds a little bit like the Nascar NexTel Cup.

DERSE: You got it right on the head, exactly. The PGA Tour looked over at what Nascar did to try to sort of sustain interest throughout the entire season, as opposed to just who’s won the most races, who’s won the most prize money, and try to really create a championship feel to its entire season. So, what it’s done is it’s created season-long points format. So players accumulate points over the course of the season and then they end with four big tournaments. And you have to qualify for those tournaments by the number of points you have. And the player who accumulates the greatest number of points over the course of the season — not necessarily the most prize money but the greatest number of point — then gets a $10 million payoff, which is a lot of money.

VIGELAND: That is a lot of money, although I have to say that it seems like golf championships do generate pretty big purses anyway. Is that $10 million way beyond what you’d get anyway, say, from the Masters or the PGA Championship?

DERSE: Well, it’s a lot more than what you’d win in any one tournament. The PGA is a pretty rich tour, as it goes. They offer about $250 million in prize money over the course of the year. Tiger Woods, of course, is the leading prize-money winner at somewhere over $9.5 million this past season. But the problem is that golf needs more stars. We can only think of a few people. Tess, can you tell me who number two and number three in the prize money list are?

VIGELAND: In the prize money? Um, I guess Phil Mickelson would come right to my mind . . .

DERSE: No, that wouldn’t be correct.

DERSE: And Adam Scott at 5 million. Not exactly names that roll off the tongue.

DERSE: Yeah, exactly. So what the PGA Tour is trying to do is build more brand presence around the tour itself, create a competitive format, and then also sort of combat the ratings fall-off and interest in golf after the PGA Championships in August. You know, it’s a summer sport and when you get into fall people really don’t pay a lot of attention. They really focus on the four major tournaments — The Masters, The British Open, The U.S. Open, and the PGA Championships. And of course those are part of the tour but they’re not really identified as PGA Tour. Imagine having the Super Bowl being an event that wasn’t really identified with the NFL. What they’re trying to do is raise that visibility and create some kind of, sort of vibrant, competitive atmosphere that you don’t normally get in golf. Golf, I mean — I’m going to get lumps of coal in my stocking for this but — it’s sort of boring. Remember Red Smith saying sailboat watching was like watching paint dry? Well, sometimes you can say the same of golf.

VIGELAND: What about this notion that Tiger wouldn’t be a part of this? He hasn’t said yet whether he will.

DERSE: Well, Tiger has said that he’s not sure if he’s going to play the first event. tiger’s going to play a lot of events. The problem for the PGA Tour is that Tiger Woods tends to play a relatively small number of events on the PGA Tour. I think he played 15 last year. He won eight of them. But they have 39 events. He’s the game, and he’s identified with the sport. And when he plays, TV ratings go up. There’s a lot more popularity. Well, to have your best athlete not play in over half of your tournaments is an issue for the PGA Tour.

VIGELAND: Alright, is this gonna work?

DERSE: Well, it’s going to be up to the players to work. If Tiger Woods and the top golfers want to make this happen and really want to play and actually commit to playing in more events and build this into a championship, this could work very well.

VIGELAND: Alright, our business-of-sports analyst Ed Derse is vice president of interactive media at Fox Sports International. Thanks for coming in, Ed. And happy holidays.

DERSE: Happy holidays to you, Tess.