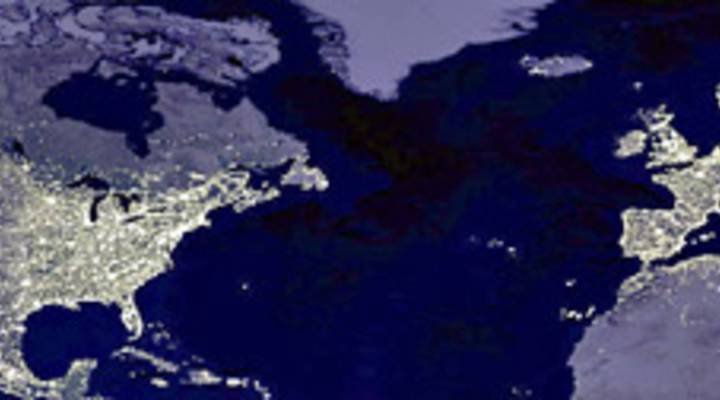 MARK AUSTIN THOMAS: Free trade. It’s a topic we’re likely to hear a lot more about over the next few months. The U.S. wants to see trade expanded and is acting quickly before President Bush loses his so-called fast-track authority to negotiate deals next year. Meanwhile officials on both sides of the Atlantic have been floating a pretty expansive idea. It would relax trade restrictions between Europe and North America, the two largest trading blocs in the world. From Berlin, Ethan Lindsey reports.

ETHAN LINDSEY: Every day $1.8 billion worth of goods is shipped between Canada, Mexico, and the United States under NAFTA, the North American Free Trade Agreement.

But that trading bloc will be overshadowed next year by TAFTA. It would be the mother of all trade agreements stretching across 28 countries from eastern Poland to the American West Coast.

Global trade is already a world of trouble, so why do we need another mammoth trading bloc?

Peter Zeihan is the economist in charge of European issues for the consulting group Stratfor. He says there’s a lot of theories out there, but one looms over the rest: China. It’s got its thumb is on the trade scale and Western powers are looking for a counterweight.

PETER ZEIHAN: One, you do have a rising China now. It’s a China that competes at a completely different level than from what most of the Western governments and economies compete at. But it is something that’s considered a threat.

The thinking goes like this: If Europe and the U.S. were to merge into one super-trade-zone, it would be home to most of the world’s wealthiest consumers.

A unified market would give rich consumers in the West a stronger hand in negotiating terms with the world’s fastest-growing producer, China.

German chancellor Angela Merkel feels strongly that hitting that trade balance is so important, some expect her to tackle the issue during her six-month run as the rotating president of the EU. That begins on January 1.

But it’s a high stakes gamble.

ZEIHAN: Whenever a European leader adopts the mantel of the presidency of the European Union, they really only have a short period of time to make an impression. Remember that their entire term lasts six months. There’s very little time to get anything done.

If she picks this as the issue and then doesn’t quickly get things moving, it will not only reflect poorly on her political power. But it also means Germany will have lost a rare shot at driving the EU’s agenda.

At a recent press conference, Merkel says she believes in the free market fundamentals of such a deal.

ANGELA MERKEL [translator]: Europe must constitute itself and it must prove that it can create politics according to its own values in a world of more competition, in a globally transparent world. That is the big task we face.

Which is why, Zeihan says, that when she takes on the presidency she’ll be tackling the phones with the zeal of a telemarketer.

ZEIHAN: If she’s going to attempt to put her mark on European- American relations for the next decade, and do it with TAFTA, she has to do one very important thing first: Contact everybody. There’re gonna be 27 heads-of-state, and she has to make sure all of them at least tacitly support the idea of free trade in some level with the United States.

And while European reaction remains murky, at least one of those phone calls will be received warmly.

Susan Schwab, the U.S. trade representative, has been outspoken in favor of reopening talks on TAFTA.