KAI RYSSDAL: OK, maybe it’s a stretch to compare the U.S. labor market to a bowl of porridge. But there is a certain symmetry, if you think about it. Too hot’s bad econmically. Inflation could burn ya. Too cold’s no good either. Forget that soft landing. The actual number is 132,000 new jobs last month. Better than analysts expected. But not without some downside risk, as Marketplace’s Amy Scott reports.

AMY SCOTT: Some industries fared better than others: 15,000 factory jobs evaporated last month, nearly half of them in the auto business. Construction companies cut 29,000 jobs. But from retail to healthcare to leisure and hospitality, service jobs expanded. Nariman Behravesh is chief economist at Global Insight.

NARIMAN BEHRAVESH: The message here is that despite problems in housing, despite some problems in manufacturing, especially autos, the service sector is more than making up for those problems.

The news dashed hopes on Wall Street that the Federal Reserve would cut interest rates anytime soon. Wages are rising with the tighter job market. And some fear businesses will jack up their prices to pay for it.

But economist Gina Martin with Wachovia says the Fed seems to have succeeded in slowing the economy enough to keep inflation at bay, but not enough to trigger a recession.

GINA MARTIN: This auto sector trouble might be a little bit more than the Fed had bargained for, but otherwise I think this is going just about as exactly as the Fed had planned.

Most analysts expect the Fed to hold short-term interest rates steady when it meets next week. And now many say it could be March or later before the cost of borrowing falls again. 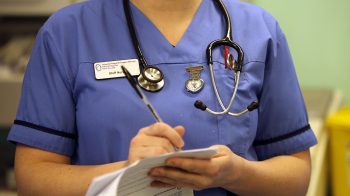