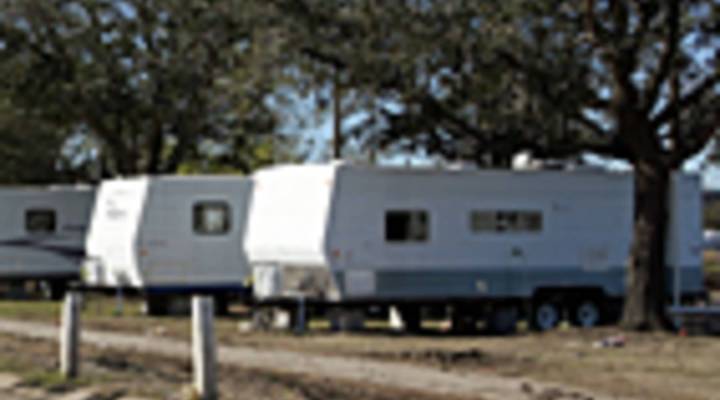 Trailers set up for those who lost their homes during Hurricane Katrina in Louisiana. Ethan Miller (c) Getty Images

Trailers set up for those who lost their homes during Hurricane Katrina in Louisiana. Ethan Miller (c) Getty Images

KAI RYSSDAL: The Federal Emergency Management Agency has done a lot of time under the hot lights since Hurricane Katrina. First there were the critiques of the agency’s response to the disaster. Since then, the scrutiny’s been over FEMA’s problems getting the aid where it needs to go. Today the Government Accountability Office went to Capitol Hill to give a progress report. Stop me if you’ve heard this one before. FEMA’s lost tens of millions of dollars to fraud and waste. Keeps on doing it too. Marketplace’s Stacey Vanek Smith reports.

STACEY VANEK-SMITH: The GAO found that of the $7 billion FEMA has given out to people affected by Hurricanes Katrina and Rita, about a billion of it has been lost to fraud. Greg Kutz authored the report.

GREG KUTZ: You’ve created a whole new series of victims: The taxpayers who are actually footing the bill for this. And no one finds that acceptable and they want to hold FEMA accountable.

Among the findings: FEMA made about $20 million in duplicate payments. And government workers have lost about a third of the aid-related equipment they ordered up on federal credit cards.

Economist Jared Bernstein is with the Economic Policy Institute. He says in spite of the GAO’s rigorous scrutiny, nothing seems to be changing at FEMA.

JARED BERNSTEIN: They continue not to implement, or at least to have great difficultly apparently, implementing these very common-sensical recommendations.

The GAO wants more checks in place. Like verifing addresses and Social Security numbers. But economist Bernstein says FEMA has the technology to do these things and the fact such large-scale waste is occurring is extremely worrisome.

BERNSTEIN: Really what you have here is a pretty clear case of pretty massive agency failure. Now that doesn’t mean that we don’t need a FEMA, it just means we need an emergency disaster agency that works and this ain’t it.

FEMA told Marketplace it’s working to correct weaknesses in its system and recover some of the money lost to fraud.