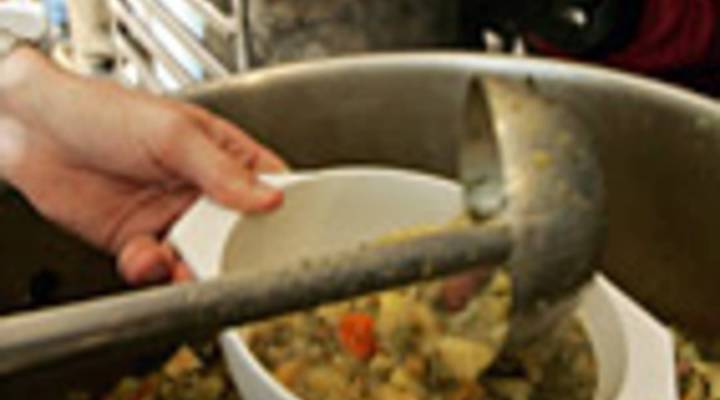 People line up for soup at a soup kitchen. Sean Gallup, Getty Images

People line up for soup at a soup kitchen. Sean Gallup, Getty Images

BOB MOON: From the Frank Stanton Studios in Los Angeles, I’m Bob Moon in for Kai Ryssdal, who, I would imagine, is sinking his teeth into a nice, juicy drumstick right about now on this Thursday, November 23, the day we all give thanks . . . that we’re not turkeys.

And more seriously, a day to remember those who aren’t as fortunate. This Thanksgiving is even tougher for the organizations that are dishing out turkey and trimmings to many of the 35 million Americans who struggle to put food on the table.

Federal handouts make up a quarter of the food served up by soup kitchens and food banks each year, but those government donations are down. And as Marketplace’s Stacey Vanek-Smith reports, America’s hungry could soon feel the pinch.

STACEY VANEK-SMITH: At Neighbors Together soup kitchen in Brooklyn, dinner is being served to hundreds of people who’ve come in from the cold for a hot meal.

Typically, much of that food comes from the U.S. Department of Agriculture.

ED FOWLER: The federal funding is really critical for us. It really supplements the other kinds of food that we try to provide.

That’s Executive Director Ed Fowler. He says he really counts on the donations from the USDA.

The USDA gives a certain amount of food to food banks each year — things like canned vegetables, pasta and rice. That hasn’t changed, but the USDA also makes a supplemental donation. That’s the food it buys to keep produce prices up for farmers.

Because produce prices have been so high this year, the U.S. hasn’t been buying that extra produce. As a result, its supplemental donations are down by more than half.

Fowler says that will hit his kitchen hard.

FOWLER: It forces us to use our cash to buy foods that we would have been able to get through commodities from the federal government.

The shortage will likely translate into belt-tightening at food banks, pantries and soup kitchens all over the country.

Vicki Escarra heads up America’s Second Harvest, a national network of food banks that feeds about 25 million people every year.

VICKI ESCARRA: Food donations are down somewhere between 10 and 20 percent and you can see when you go into some of our warehouses and our food banks that typically are filled with food. Unless this picks up, millions of people will not be eating anything over the holiday season.

Making the problem worse is the fact that post-Katrina, private donations are way down, and demand in many parts of the country is up.

Ed Fowler with Neighbors Together says his kitchen has seen about 20 percent more people this year, most of them working-poor.

FOWLER: What we’ve seen more and more is people who are working and even working full-time that can’t afford to pay rent and buy food.

For its part, the USDA told Marketplace it donates millions of pounds of food to food banks every year. And that its supplemental donations have always been subject to market conditions.