But even while the bombs were falling, another blitz began. And unlike the war, this campaign is still going on. From Lebanon, Ben Gilbert reports.

BEN GILBERT: Zalka is a strip of chain malls and 10-story concrete buildings on the six-lane coastal highway just outside Beirut. Among the fast-food joints and lingerie advertisements, a towering, five-story, slick, black billboard shows the yellow outline of a man with a cane strutting across a broken bridge. It’s a Johnny Walker whiskey advertisement, and it carries a simple message: “Keep Walking . . .”— a reference to the more than 70 bridges destroyed in Lebanon during the war.

Twenty-four-year-old Aziz Sami Zouk works just down the street from the billboard as a marketing manager at a home nursing business.

ZOUK: I love it. It’s a code we use amongst friends. When we want to party or something, we just say, “Do you want to go walking? We have to keep on walking.

MOHAMED AHMED: It’s kind of like their mocking at us, actually. I don’t like it. It’s kind of rude. They shouldn’t put ads like this, you know? They should concentrate on rebuilding or something like that.

Ahmed works as a public relations manager for a local magazine, and says he rejected an offer to have the ad appear in his publication. And around Lebanon, the Johnny Walker advertisement is the most controversial and the most famous of the dozens of ads that have followed the war.

It got so much publicity, in fact, that the advertising agency that created it, Leo Burnett, is not allowed to talk about the ad now. But they can talk about their other successful campaign for the second-largest bank in Lebanon, Bank Audi.

Valerie Bassil managed their ad campaign, which featured a simple child’s drawing of a sun.

They completed the billboard, newspaper and TV ads in 24 hours. And the bank requested the ad campaign while the war was still raging.

BASSIL: Because they thought that people were depressed and demotivated, so they wanted to give, like, a message of hope to boost people’s morale during these tough times.

Soon after Bank Audi’s ads appeared, other banks followed with their own. Then shopping malls and car companies joined in. Advertising agency Impact BBDO designed an ad for Volkswagen that says, “Small But Tough,” with a picture of one of the company’s compact cars next to a map of Lebanon. BBDO Associate Director Joe Ayache says he advised his clients to advertise during the war and address the conflict in their messages to create a bond with consumers.

JOE AYACHE: This is a crucial time for brands to remind their consumers that they are there, that they are present, because they are the ones who are going to reap all the benefits once good times are again in the horizon.

Sarah Mansour, a 20-year-old law student, sees right through it.

Saatchy and Saatchy is one firm that didn’t encourage clients to address the war in their advertising. Chief Executive for Lebanon Elie Khoury says it wasn’t for fear of offending the Lebanese.

ELIE KHOURY: I did not advise my clients to connect to the consumers based on that war. Because, in my opinion, it was telling people, “Yeah, so what. We’ve had another war, so let’s deal with it. I did not want to spread that kind of false hope, if you want.

I am more on telling the people that, “No, you still have an issue in your country. You gotta deals with these.

Many countries helping to rebuilt Lebanon have bought ads, not to inspire hope but to advertise their own contributions. The United Arab Emirates, Qatar, France and others aren’t hoping to win Lebanon’s pocketbooks, but the hearts and minds of the citizens in a politically polarized country. 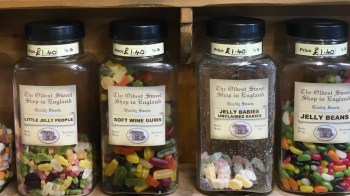 A nearly 200-year-old sweet shop stood the test of time. How is it weathering the pandemic?