Selling bonds to save lives

Selling bonds to save lives

KAI RYSSDAL: U.S. government bond traders got a talking to today. The Federal Reserve and a fistful of other regulators called a meeting in New York. There’ve been some rumors of questionable trading practices in the multi-trillion dollar Treasury market.

Over in the U.K., the British government launched a new kind of bond today. It’ll pay competitive yields. But it’ll fund a humanitarian project. From London, Marketplace’s Stephen Beard reports.

STEPHEN BEARD: You could call this a huge capital injection. The plan: to raise $4 billion on the bond market, and then use the money to innoculate up to 500 million children in the Third World.

Britain, France, Spain, Italy and Sweden have backed the bond. They will pay the interest and repay the bondholders out of their foreign aid budgets over the next decade. British Finance Chief Gordon Brown dreamed up the scheme: to borrow billions in order to vaccinate now.

GORDON BROWN: There is no better case for advancing money than vaccination because if you can immunize 100% of the people then you avoid others who might not be vaccinated spreading disease.

The Pope and other religious leaders snapped up the first of the vaccination bonds issued today. The head of the Church of England, Archbishop Rowan Williams, gave his blessing at the launch ceremony.

ROWAN WILLIAMS: This is not a one-off event. It is a model. It is something which ought to be a beacon for other nations, for the whole world, for the economic community internationally.

The U.S. is not participating. White House officials say mortgaging future aid budgets is not the American way. Britain’s finance chief says it’s just a matter of political will:

But does the US need any lectures, especially on the subject of deficit spending? The U.S., after all, is the world’s biggest debtor nation. 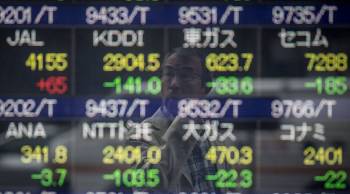 Japan’s bonds are worth basically nothing — or less