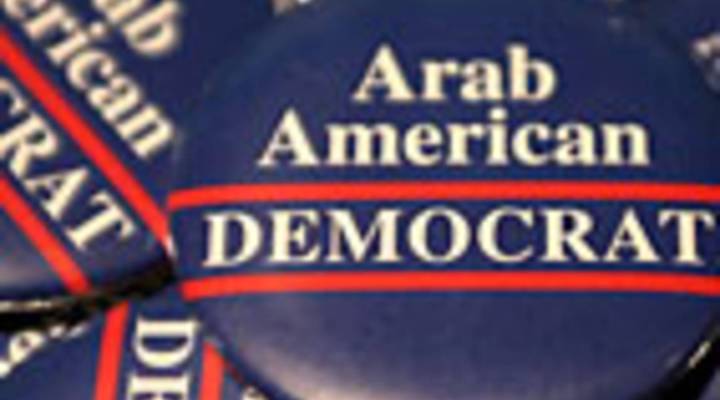 KAI RYSSDAL: Politicians in Michigan are no doubt breathing a sigh of relief. The Detroit Tigers wrapped up the American League championship over the weekend. Which means people might actually watch tonight’s final debate in Michigan’s gubernatorial race. A poll by the Detroit Free Press shows Democratic incumbent Jennifer Granholm slightly ahead of her Republican challenger Dick DeVos. Most observers rate it a toss-up. Michigan’s a kind of weathervane of shifting political winds. More than 400,000 Arabs live there. Nationwide, they vote in greater numbers than the general population. But Marketplace’s Nancy Farghalli reports Arab Americans haven’t yet mastered the money.

Now imagine trying to wake up an entire community, not just a college student on a Friday morning. Kenwah is the Michigan field officer for the Arab American Institute.

KENWAH: We need to empower ourselves politically. And I always use the example of “We wouldn’t be in the mess that we’re in right now if we were politically organized and we had a political voice.”

By mess she means the American policy in the Middle East.

KENWAH: We have limited resources to help shape these types of policies because we’re not politically organized enough.

Limited donations might be the reason. Mike Shehadi is a pharmacist in Dearborn, Michigan.

MIKE SHEHADI: The reason I donate money is because it’s very important for our community to have a strong vote.

SHEHADI: Hispanic people, where they have plenty of votes, whatever they want, any demand, it can be applied. Where, with us, we don’t have anyone in government, officials or anything.

In other words, access to policymakers. According to the Center for Responsive Politics, Pro-Arab groups gave under $800,000 to political campaigns and candidates in the last 16 years. Compare that to the Pro-Israeli total of $57 million.

Kenwah Dabaja says Arab Americans do donate, but it’s not concentrated giving. First, they don’t give under the banner of being Arab American.

KENWAH: They tend not to have money set aside for things like donating. Most people do donate to their churches and mosque because they have close ties with their religious identity.

The call to prayer has just begun when Kenwah walks into the Islamic Center of America in Dearborn.

KENWAH: Here, what we’re gonna do because we have such a large, captive audience, we’re gonna set up a table outside during services so that we can register people to vote. We’ve done it before and it’s been pretty successful.

Can that success translate into political clout? Recent events show a mixed picture. The Detroit Jewish News ran an editorial against the Arab American political action committee. Then the Republican candidate for governor, Dick DeVos, cancelled dinner with that group. Warren David is president of Arab Detroit.

WARREN DAVID: He was asked to speak at the Arab American political action committee. He declined. And the reason was that he was under pressure from the Jewish community not to speak there because they told him that the people that were there were, you know, supported Hezbollah during the war.

One of the committee leaders did make comments about resistance to Israel. DeVos later met with Arab American leaders in Dearborn. And Kenwah says that just shows the importance of courting the Arab vote on both sides of the aisle.

KENWAH: We are a constituency that they can’t ignore because of the atmosphere right now, politically. Everything that has been happening whether they like it or not is tied to the Middle East.

Maybe that’s why her trunk is a bipartisan mess.

KENWAH: This is my mobile office. This is the AAI get-out-the-vote office.