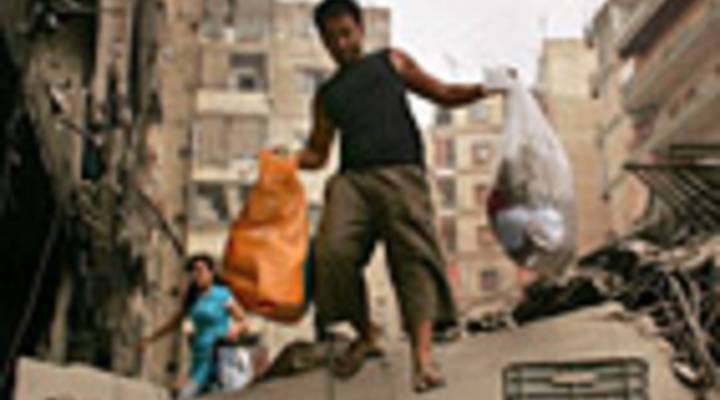 COPY
Members of the Dib family walk with salvaged items from their destroyed home in the southern suburbs in Beirut August 14, 2006. Spencer Platt (c) Getty Images

SCOTT JAGOW: Today, Israel said it’s almost out of South Lebanon. Israel had a constant presence there during the war with Hezbollah this summer. Meanwhile, President Bush is asking American companies to help rebuild Lebanon from the war. But many Lebanese-Americans might not send their money back home. Not this time. Nancy Farghalli reports from Dearborn, Michigan.

NANCY FARGHALLI: Ali Dagher inserts a tape into his VCR. The time stamp reads December 6, 2005. On that day, Dagher traveled to his family’s hometown in Lebanon. He smiles at the recorded images on the television. His grandfather’s mechanic, the apartment buildings with mountain views.

On screen, Dagher is in a car with his cousin. The iPod sits on the dashboard. They’re listening to Walking on Sunshine.

Dagher is a lawyer in Dearborn, Michigan. He’s one of 10,000 residents in this area with roots in Lebanon. His family is from Bint Jbail, that’s a southern town near the border of Israel. That area had some of the heaviest fighting between Israel and Hezbollah.

DAGHER: I’ve seen pictures of this where people, the street no longer exists because of the rubble and literally people are walking on top of the roofs to get to one place to the other. All of this is gone.

Nine members of his extended family died. Several family homes are buried under rubble. Dagher’s story is similar to others in Dearborn. Nasser Beydoun is the Chairman of the American Arab Chamber of Commerce.

NASSER BEYDOUN: People have a personal investment in that region and want to see Lebanon prosper and do the right thing. My fear is that money doesn’t go for the purposes that it is intended to. It doesn’t reach the people.

That choice to invest is a choice they’ve had before. After the 15-year civil war ended in 1990, Lebanese Americans poured money into Lebanon.

BEYDOUN: We saw a lot of Lebanese go back and build second homes where they would go spend the summers.

Some in Dearborn only plan to visit in the summer. They won’t be replanting financial roots. Mike Shehadi is a pharmacist. He still sends money to his father in Lebanon. But he says Lebanon is stuck in a cycle of war and reconstruction.

MIKE SHEHADI: Personally I don’t think it will ever end. So I mean why should I waste my money down the drain by sending it to Lebanon?

That’s not what Ali Dagher believes. He says Lebanon needs help from its Diaspora.

DAGHER: Those of us who have property there that has been destroyed are likely to see it rebuilt and if we have to add a little bit more money to the process of making it nicer maybe we will get something better than what we had before

Dagher is ready to commit money. This week, he’s in Lebanon assessing how much to give.