KAI RYSSDAL: Over at Boeing they make a lot of, well, airplanes. A whole lot of other stuff, too, though. It was widely reported today Boeing’s going to be awarded a big federal contract. To build a high-tech border fence. Gadgets and gizmos but not a whole lot of aircraft. More from Marketplace’s Scott Tong in Washington.

SCOTT TONG: Boeing plans to put up 1,800 towers and equip them with high-tech zoom lenses, plus heat and motion detectors. Cool technology, says contracting expert John Slye. The trick will be integrating it all. He says it’s one thing to have a single camera.

JOHN SLYE: It’s another thing to have 2,000 cameras out there. And there’s a computer in the background deciding, what am I looking at? And which of these images should I send to the control room to alert them that there’s something going over here that’s significant?

The virtual fence project is run by the Homeland Security Department. Slye’s first reaction to that was, “Uh oh”— given its spotty contracting record post-Katrina. But now he’s encouraged that this looks like a careful, first installment: Boeing gets $80 million in a project that could balloon to $2 billion.

SLYE: They did maintain some degree of discipline. Kind of a measured response. Versus a hurricane Katrina approach, where they’re just going to throw money at the problem and we’ll figure out how it got spent later.

Philip Coyle will be watching it all closely. He’s a former weapons tester at the Pentagon, where large contractors like Boeing have had a mixed record.

PHILLIP COYLE: The concern is that these large defense contractors will end up with very expensive projects, which overrun their budgets by millions, or even billions of dollars. And end up years and years behind schedule.

Even if the high-tech fence works, that won’t necessarily solve illegal immigration. Experts say a third of the country’s 12 million undocumented persons came on visas, and then they overstayed. 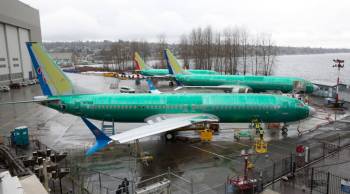 With swift decision on Boeing 737s, China hopes to lead