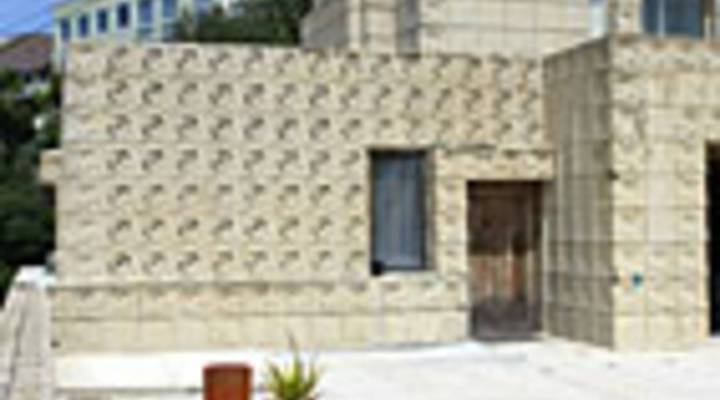 Living next door to a work of art

Living next door to a work of art

MARK AUSTIN THOMAS: Frank Lloyd Wright is probably America’s most famous architect. He built more than 300 structures ranging from private homes to public museums. About 80 percent are still standing, but recently several Wright homes have all been bulldozed. More are on the chopping block. Why would anyone tear down a Frank Lloyd Wright building? Stacey Vanek-Smith reports that Wright homes don’t always make good neighbors.

STACEY VANEK-SMITH: Frank Lloyd Wright’s so-called Ennis House is perched on the edge of a cliff in the Hollywood Hills overlooking Los Angeles. The 1924 home looks like a Mayan temple, and is constructed entirely of specially molded concrete blocks.

It’s been used in more than 80 movies, including Blade Runner and The Day of the Locust. It even served as The House on Haunted Hill in the 1959 Vincent Price classic.

[ Scene from the film: I’ve rented the House on Haunted Hill tonight so that my wife can give a partya€¦ a haunted house party… she’s so amusing ]

Sounds like a real boon to have in the neighborhood, right? Not necessarily. For one thing, it’s falling apart.

The wall that supports the Ennis House on its steep perch has been collapsing for decades. Last year it got so bad, the city deemed the home dangerously unstable.

ROBERT LEARY: So the workers right now, you can hear, they’re actually building the pylons.

That’s Robert Leary, president of the Ennis House Foundation. It teamed up with several conservation groups to raise the $6.5 million needed just to stabilize the home. It will cost an additional $10 million for a full restoration.

Why so much? Well, when you’re fixing a house that Frank built, you want to do it right.

So if one of the concrete blocks gets damaged, you have to track down the original molds Wright useda€¦ research the materials that went into those blocks and find someone who can make a new one.

But standing in the grand living room of the Ennis House, Leary says saving a space this special shouldn’t be a question of money.

ROBERT LEARY: You would preserve a work by Rembrandt or Vermeer and masterworks of architecture? Well, that has to come into play.

But people living near the Ennis House have long complained the crumbling property was damaging their own home values.

John Mutlow has lived across the street for more than 20 years.

JOHN MUTLOW: It doesn’t matter if it’s a Frank Lloyd Wright house or any house. If it’s in decay, it’s in decay and it negatively affects the community.

Mutlow is glad to see the house getting restored, but he’s still concerned for the future.

MUTLOW: If the use of the house is overtly public, then it brings the value of the community back down again.

Neighbors now worry once the Ennis house is renovated, the owners will want to make money off of it and that the community will face an endless caravan of tourists, movie vans and private partygoers.

Robert Leighton is president of the Beverly Hills and Greater Los Angeles Association of Realtors. He says living next door to a work of art isn’t easy, but it can pay off.

Not everybody is willing to invest the cash and time needed for that payoff. Conservators estimate a full quarter of Wright’s remaining buildings in the United States are at risk of demolition.