KAI RYSSDAL: Viacom chairman Sumner Redstone’s 83 years old and worth $8 billion. So I guess he figures he can say whatever he wants. Redstone told the Wall Street Journal he doesn’t really care for Tom Cruise anymore. Said he’s a fine actor. But Redstone’s fed up with his public antics and goings on about Scientology.

The Marketplace angle here is that Viacom won’t be renewing its 14-year deal with Cruise and his production house. The Cruise camp didn’t miss a beat. His handlers announced they’ll finance future projects using hedge-fund money.

We asked Marketplace’s Jeff Tyler to consider Tom Cruise as an investment strategy.

JEFF TYLER: It’s kind of like in the stock market, when a stock drops after a company announces big profits but investors had expected bigger profits. It’s not as if “Mission Impossible III” was a flop, it made just under $400 million. But as Daily Variety Managing Editor Michael Speier explains, studio execs had expected more than the $550 million box office bucks brought in by Mission Impossible II.

MICHAEL SPEIER: And all of a sudden, you come in at $200 million less than the second one, that’s a lot of money. And if you can’t explain where that went and how come people just decided not to go, that is like a stock just not performing well and no one kind of getting it. And then people looking at each other and saying, “Let’s bail.”

It’s not like hedge funds have done much better. They financed four big-budget Hollywood movies this year. “Superman” wasn’t the Man of Steel at the box office, but at least the film didn’t tank — like “Poseidon” or “Lady in the Water.”

DAVID WHITE: He’s a name brand in the marketplace. They get him the right vehicle, those vehicles will make money. And that’s what hedge funds are in the business of doing. Even if he’s not making as much money as he did in the high point of his career. It doesn’t mean that he won’t make a lot of folks a lot of cash.

But how much is a lot? Your mission, should you choose to accept it, is to figure out: Is $400 million a healthy return? Or the sign of a falling star? 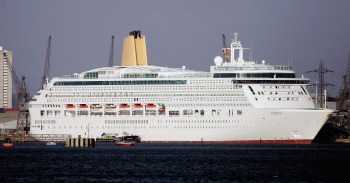