KAI RYSSDAL: Walk into the fruit and vegetable section of your grocery store and you know it’s summer. Great looking produce all over the place. Fact is, though, some of it got to be so good-looking thanks to the use of pesticides. Spefically, one controversial group of pesticides. They’re set to get final approval from the Environmental Protection Agency tomorrow. Over the objections of some EPA scientists. From the Marketplace Sustainability Desk, Jule Gardner has more.

JULE GARDNER: The pesticides we’re talking about are called organophosphates. And they’re not new to American crops. Despite being banned in England, Sweden and Denmark, they’re used here to treat everything from wheat fields to fruit trees. They’re made up of some of the same chemicals in nerve gas. And guess what? They work.

JIM JONES: These compounds, insects have not figured out how to develop resistance to them.

That’s Jim Jones, head of the EPA’s pesticide program. Ten years ago, Congress gave his office a deadline — Aug. 3, 2006 — to test human tolerance to organophosphates and other pesticides. And now that the deadline is here:

But his confidence is by no means unanimous. In a rare show of solidarity, unions representing some 9,000 EPA employees — including scientists who work directly with these pesticides — sent a letter to their boss, the EPA administrator. It said, essentially: Not so fast.

The unions contend the science is inconclusive about the effects of these pesticides on infants and fetuses.

Bill Hirzy, a union vice-president and spokesperson on this issue, is also a senior scientist with the EPA. He’s studied animals dosed with malathion. That’s one of the pesticides up for approval.

BILL HIRZY: What we do see in these animals, in the young animals, is some gross features. They stagger around. You can see that kind of thing. What you can’t measure in animals is effects on learning ability, subtle behavioral effects, and that’s the real concern that’s at the heart of our action here.

Because scientists don’t really know exactly how pesticides affect the developing neurosystems of babies, the unions think a new battery of tests are needed. And in the absence of reliable information they also want the EPA to increase what’s known as the “safety factor” for certain pesticides. But the EPA’s Jim Jones says that in 10 years of testing, the agency has done all that it’s required to do by law.

JONES: Had they raised an issue we felt that we hadn’t addressed, we would have addressed that.

That the employees came forward at all is telling to Jeff Ruch, executive director of Public Employees for Environmental Responsibility, or PEER.

JEFF RUCH: It’s unusual that the unions are taking on these issues of scientific integrity and intellectual candor, and it bodes well because it means that you have an effective way for the scientists to communicate with the people they actually work with, the American public.

In the meantime, the unions’ Dr. Bill Hirzy has some advice for the rest of us:

HIRZY: Let’s put it this way, I buy organic as much as possible. And when I can’t, I make sure that I wash with soap and water, not just with water, any products that I buy. It makes sense, especially if you are the parents of young children, or if you are a pregnant woman, to take special care to watch out for these kinds of exposures. 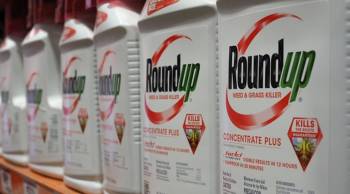