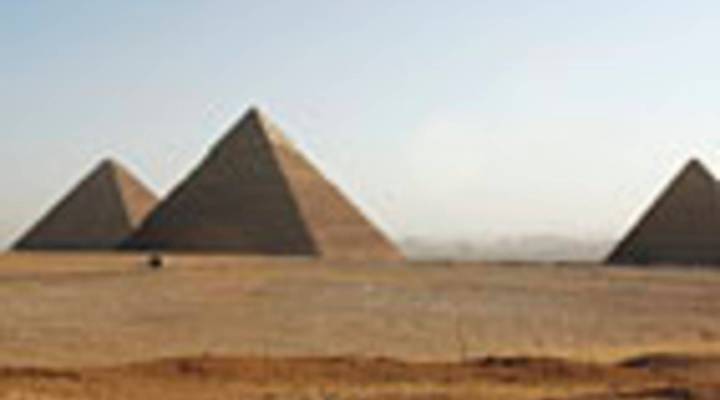 SCOTT JAGOW: The people of Lebanon were hoping for a record tourist season this summer. Instead, they got war. Thousands of tourists are fleeing the country because of the fighting between Israel and Hezbollah. A lot of those tourists are going to Egypt. So now, Egypt is hoping for a bump in tourism. Visitors who tour the Pyramids will notice signs advertising the next big thing coming to Egypt. Nancy Farghalli tells us what it is.

NANCY FARGHALLI: A lone cement truck coughs up sand in a desert plateau near the Pyramids. It’s close to 100 degrees. There’s no shade, nothing to block the sun from baking the faces of construction workers.

In a few weeks, they’ll begin building the largest Archeological Museum in the world: The Grand Egyptian Museum.

Yasser Mansour is the Chief Architect for the new museum. Inside his air conditioned office, he keeps his cool about the project’s budget.

MANSOUR: It’s about $600 million and the number is getting larger and larger.

More so in the last week. Folks who planned vacations in Lebanon are now coming to Cairo. Hotels are nearly booked.

The Cairo museum was built for 500 guests a day. Now, it welcomes 10,000 people a day during peak tourist season. And that number will only increase as tourists revise their travel plans.

Zahi Hawass is the General Secretary of the Supreme Council of Antiquities in Egypt. He says the new museum can handle a bigger load of visitors.

ZAHI HAWASS: People can stay at least not the one or two hours at the Cairo Museum. They need one day. And that will increase the number of days for visiting Egypt.

And that will help camel owners like Sayad Abo Gozala. He waits for a tourist to buy a white scarf before making a pitch. He offers her a Kodak moment with his camel near the Great Pyramid. All for the bargain price of $3. That’s triple what many Egyptians earn in a day.

SAYAD ABO GOZALA: Everybody will come to the visit and I think the new museum will be besides the pyramids and it is very important.