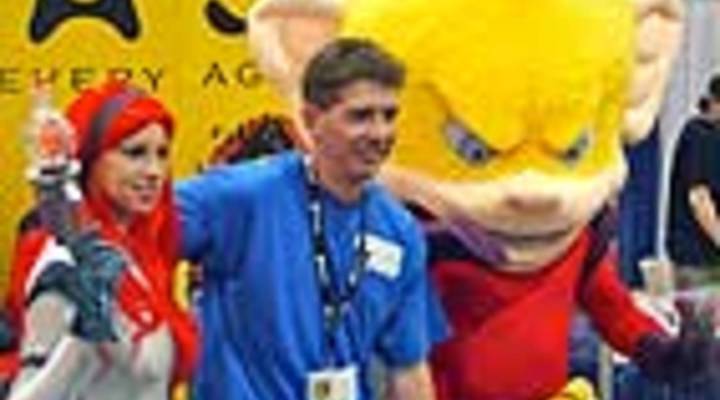 A Comic-Con conventiongoer and people dressed as comic characters pose for a picture. Ethan Lindsey

A Comic-Con conventiongoer and people dressed as comic characters pose for a picture. Ethan Lindsey

KAI RYSSDAL: There’s a big convention in San Diego this weekend. Not dentists or insurance agents. But I guess they could be there too. Loyalists call it the “nerd prom”. Officially, it’s Comic-con. The biggest gathering in the country celebrating comic books. More than 100-thousand fans are in town for the 37th annual convention. There’s a lot of tradition. People typically come dressed up as their favorite character. But Marketplace’s Ethan Lindsey reports there are some unwelcome guests this year.

ANTHONY WHITFIELD: I just see a sea of people. I don’t know, it feels like you’re walking 10 miles just to go through the whole thing.

ETHAN LINDSEY: At ‘The Con’ as nerds-in-the-know like Anthony Whitfield call it, the hall is teeming with Darth Vaders, Pokemons, and Princess Mononokes. Or at least how heavy-set 40-year-old men look dressed up as those fictional characters.

WHITFIELD: Some of them shouldn’t be wearing some of those costumes. But they’re fun nonetheless.

From the second floor of the mammoth San Diego Convention Center, the showroom stretches the length of four football fields. One loosely-organized group of fans claims a membership list of 3,000 people who build and wear replica Star Wars armor to events like the Comic-Con.

But, you never know, standing next to that storm trooper may be a studio executive prowling for the next summer blockbuster. That’s because in the past few years, Hollywood has descended on the event as a way to find well-written, plot-driven diamonds in the rough.

Some comic artists like Kevin Elthieri mourn the change. He says the show is no longer about the art.

KEVIN ELTHIERI: It is more about the deal. Comic-Con used to be a very small, intimate thing for fans by fans. And it was basically a big party that all of us fans would have every year. And it has been grabbed up, capitalized, expanded into like this gigantic monster.

The movies “Constantine,””Sin City” and “V for Vendetta” all began as somewhat obscure comics. But then Hollywood came a callin’ and each grossed more than $70 million at the box office.

Brian Posehn is a comedian and filmmaker. He got no studio interest from his latest screenplay. So instead, he and co-writer Gerry Duggan adapted the story into a comic book. And drove down to San Diego as a way to sell it in Hollywood.

BRIAN POSEHN: You know, because they have zero imagination. Now, you don’t need one to look at a comic book. A script you have to go, “How would this look? Who is the guy that will say the words that this guy says?”— That’s my impression of every [BLEEP] in Hollywood reading a script.

Posehn has published two issues of the comic. And he’s hoping that with them, he can seal a studio deal. That’s why, despite all the commercialization, some fans are A-OK with the corporate suits walking amongst the cyborg suits.

Alex Soto is a producer with the Cartoon Network. He’s been to the Con every year since 1994.

ALEX SOTO: It’s also put comic books out there in a market that’s so wide that it targets adults. And it’s expanded. People have come to accept it more. And I hope that it keeps growing.

That wish may be granted. Last year 104,000 attended. This year, organizers expect 140,000 people. No word yet on how many storm troopers.