KAI RYSSDAL: If ever you had a sense the economic gods were conspiring, today might be the day. Wholesale prices are going up way more than expected. We learned this morning the Producer Price Index rose half a percent in June. Tomorrow, we’ll hear about the Consumer Price Index. That’s inflation for you and me at the cash register. And Ben Bernanke starts two days of economic testimony up on Capitol Hill. The Fed chairman also happens to be this country’s number one inflation hawk.

We all know what usually happens when inflation hits. Retailers pass on their extra costs to us. Some stores, though, can’t do that. At least not if they want to be true to their name. Alex Goldmark has more.

ALEX GOLDMARK: OK, so I hear the hubbub about inflation and rising gas prices and all, but I don’t care. I’ve got a crisp dollar bill in my pocket and that still goes a long way at the dollar store — you know, the discount stores where everything costs . . . yup . . . $1 or less.

ERIC SCHIFFER:I think it’s great for a customer to walk in and know they could afford any single item on the shelf, and it makes everyone feel like a millionaire when they’re in our store.

That’s Eric Schiffer, CEO of 99 Cents Only stores, the fourth-largest dollar-store chain in the country. They haven’t raised their prices — or, I should say their price — since 1982. I can get four light bulbs, or three candy bars, shampoo or a T-shirt each for 99 cents. So, why whine about inflation?

MIKE TARAFDAR: Yeah, everything went up. You know, the wholesale price. We used to pay like 79, now you pay 89, 93 cents.

Mike Tarafdar’s in the trenches, or I should say the aisles of the dollar store. He manages the independent 99 Cents Plus in Manhattan. He shows me how some of the cost increases are passed on to customers.

TARAFDAR: They used to be three in a pack. Now they making two in a pack.

He also begrudgingly sells items for more than a dollar.

BRUCE GREENWALD: There are alls sorts of changes.

Columbia University economics professor Bruce Greenwald says managers like Tarafdar have to jump through hoops to cope with inflation.

So off I went in search of the savvy consumer. I met Matt Wright in front of a wall of aggressively packaged bathroom products. Twenty percent more free on shampoo. Bonus size deodorant. Ugh. I asked him how he chooses.

MATT WRIGHT: The biggest one.

WRIGHT: That’s actually not a bad price. I should probably get this shaving cream.

And he did. But he shouldn’t get the 16-ounce shaving cream unless the 12-ounce can is more than 75 cents. Otherwise, it’s the same value.

Just like the three bars of soap for a dollar. They’re 2.6 ounces. Now, is that really better than two bigger bars for the same price? Or would my dollar be better spent on the 7.5-ounce liquid soap that says 20 percent free? There’s the four-pack of 2-ounce soap and the two-pack of 2.9-ounce bars, too. . . . And they’re all a dollar?!?!

Who comes up with this? Am I being cheated? It turns out, no! The prices are still cheaper here than anywhere else.

And the good professor tells me that company managers who set prices . . . they hate inflation even more than I do.

It’s company managers that come up with new products and strategies, so when they have to spend their time instead deciding on price increases, or on sign changes, it’s non-productive time. At the dollar store and at every other company.

I mean, if Steve Jobs had spent his time figuring out the best new price of laptops, we might never have seen the iPod.

And that kind of lost opportunity, experts say, is the real cost of inflation across the whole economy.

So, at the dollar store like anywhere else, time is money and inflation wastes time. But if you’ve got the time to spare, your best bet for a bargain is still the dollar store. Inflation be damned. 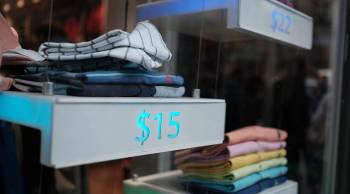 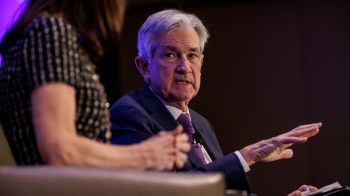