TESS VIGELAND: You may know the state for its cheese and cheeseheads, but back In the 1980s, Wisconsin reigned as the world’s ginseng capital. But competition from Canadian and Chinese growers along with trademark piracy have diminished Wisconsin’s standing. Now farmers there are hoping to reclaim the glory days of ginseng. Brian Bull reports.

BRIAN BULL: In a small shop in Los Angeles’ China Town, Joe Heil strides past several barrels of ginseng up to the cash register. He shows the clerk a box of ginseng root fixed with an official Wisconsin-grown seal.

HEIL: Is this grown in Wisconsin?

CLERK: They say that.

HEIL: Ah, they tell you that, huh?

Heil says it’s all in the color, skin, and smell of the root. The clerk asks him to leave.

Heil isn’t a government agent. He’s with the Ginseng Board of Wisconsin, on one of many “sting” operations across the nation’s China Towns.

JOE HEIL:“Our product is being misrepresented to the consumer. They’re paying a lot for something that’s not going to give them a lot of benefit or the same benefit that they believe they’re getting if it’s Wisconsin ginseng.”

Ginseng from the Badger State can ring up to three, even four times more than other types.

Wisconsin’s climate and soil creates a potent form of ginseng that many people believe holds the cure for many ailments, but unscrupulous vendors have sold foreign-grown ginseng as “Wisconsin-grown” to customers who may not know the difference.

To help buyers know they’re getting bonafide ginseng grown in Wisconsin, Congressman Dave Obey has drafted legislation requiring labels listing the country of origin. Obey says Capitol Hill has yet to act on it.

DAVE OBEY:“The Congress is institutionally biased against anything that doesn’t sound like 100 percent free trade. They think you’re trying to engage in protectionism. I don’t call it protectionism to require that people level with people in terms of what it is they’re actually selling and buying.”

At his Mosinee, Wisconsin farm, Butch Weege checks on his ginseng crop, which lays under a broad canopy of black mesh and wooden trellises. He carefully pries out a root with a spade.

Weege says 20 years ago, a Wisconsin ginseng farmer could make up to $80 a pound. But today with Chinese and Canadian grown ginseng glutting the market, the average payout is $22.

But there is some good news. Weege says Chinese officials recently contacted the Ginseng Board of Wisconsin regarding a customer complaint filed with the trade office in Shanghai, challenging the validity of some supposedly Wisconsin-grown ginseng.

WEEGE:“This was an image of our seal, it was being pirated. That little snowball has picked up in size and is now getting attention in Beijing.”

Weege says tighter policing of the market could mean better fortunes for Wisconsin’s 300 ginseng growers. But things are still a far cry from 20 years ago when the state had 1,600 growers, raking in nearly $125 million annually. 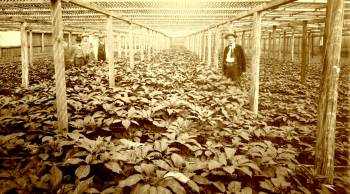