KAI RYSSDAL: I’m sure Oklahoma City, Oklahoma’s a nice place. With plenty to recommend it. But for drivers — or parkers, I guess — it has a dark place in history. The world’s first parking meters were installed there this week in 1935. In the subsequent 70-plus years, people have found all kinds of ways to beat the system. You can feed the meter. Or look for one with time left on it. Or you can do what a lot of people are doing down in Austin, Texas. Michael May has more.

MICHAEL MAY: Bruce Elfant cruises slowly down a street near the Texas Capitol building in downtown Austin. Suddenly, the mild-mannered constable gets a dark look in his eyes. He stabs his finger at cars with handicapped hangtags dangling from their mirrors.

BRUCE ELFANT: There’s one. There’s one. I see that one, that one . . . that one. So, every meter on that block had a hangtag.

Elfant turns the corner and circles the attorney general’s office. More than half the parked cars here sport the blue hangtags. Elfant doesn’t believe there’s some sort of plague disabling only government workers.

ELFANT: Parking is a limited commodity downtown, and not all businesses and governments provide parking for their employees. And it costs money. It’s, you know, $150 to $200 for contract parking. But if you have your grandmother’s hangtag, and you don’t get caught, you can park free at a meter. It’s really driven by laziness and economics.

It’s ironic that it’s largely government employees gaming the system. Elfant believes the city is losing as much as $400,000 in meter change each year. But it’s not just that. Elfant is morally outraged. He’s been on a crusade ever since he saw an elderly woman forced to roll her wheelchair across a parking lot in a blinding Texas rainstorm. But only recently has Elfant seen people abusing legitimate hangtags to park free downtown.

ELFANT: They’re being sold at flea markets. We’ve even heard of purchases on eBay. So, unfortunately, these hangtags are being treated as commodities.

It’s not just in Austin. In some cities, frustrated citizens have put pictures of violators on the Internet. In Minneapolis, the city responded by simply limiting the amount of time disabled people can park for free. Here in Austin, they’re doing stings.

Deputy Marshall Richard Sanders and about 20 other officers are staked out downtown, waiting to ID every driver using a hangtag. Sanders rolls up to a pair of deputies who have caught an able-bodied student named Gaines Axton parked in a handicapped spot.

SANDERS: Was there a reason you parked in handicapped?GAINES AXTON: Well, I was going just going to park here temporarily just to run in my paper, and she was right there, right when I got out of the car.SANDERS: Ouch!

Axton will receive a $250 ticket. In the three-day sting, the officers will write 45 tickets and confiscate 25 hangtags. But the police can ticket as many people as they want, it still won’t curb the demand. Austin’s like a lot of the Southwest. Just growing too fast. Some have urged the city to build more parking garages. But Austin Mayor Will Wynn says that would just feed other problems.

WILL WYNN: There’s only so many cars that physically can even fit on all the streets combined at the same time. So mass transit is a big part of the solution. Car-pooling is part of the solution. Having a mixed use downtown that has people living, working, playing, shopping, all in the same swath of town that would allow folks to not have to park there to begin with.

Until that day comes, Constable Elfant and his deputies will patrol the streets, on the prowl for scoundrels stealing precious pavement from society’s most vulnerable citizens.

In Austin, I’m Michael May for Marketplace. 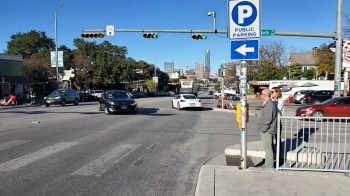