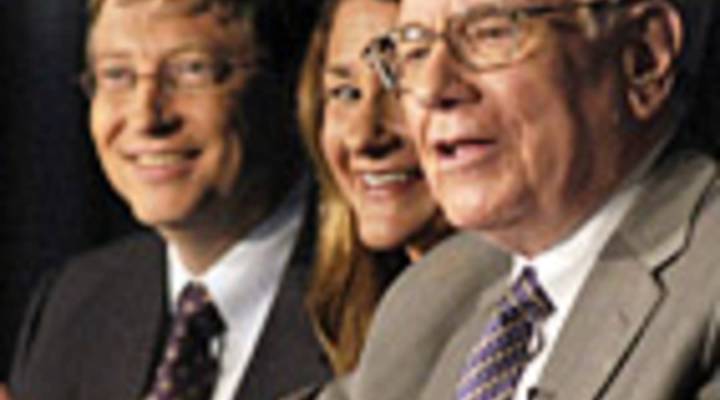 TESS VIGELAND: We’re all familiar with the historic names in U-S philanthropy. Carnegie. Rockefeller. Mellon. MacCarthur. And most recently . . . Gates. The Bill and Melinda Gates Foundation was already the largest foundation in the country, funded entirely by them. It’s about to double in size. And dwarf every charitable organization that preceeded it. Warren Buffett says he is giving away nearly $37 billion. All but $6 billion of that to the Gates Foundation. To find out how any organization absorbs an infusion like this we turn to Paul Light, who teaches about non-profits at New York University. Paul just how big is this gift? Put it in perspective for us.

PAUL LIGHT: Well, it’s about three to four times as large a gift as Carnegie or Rockefeller put into their foundations in current dollars. So, it’s by far the largest individual gift of money to a foundation in contemporary, or actually in any, history that I know of.

VIGELAND: Well, this is such an enormous amount of money. Is the Gates Foundation really, kind of the only place you could park it?

LIGHT: The Gates Foundation has, in a very short period of time, established itself as one of the most effective philanthropies in the country. You’re giving away money in very, very large chunks here. We’re not talking about $50,000 or $100,000 grants. We’re talking about $50 million. I don’t know what their average grant is at this particular point, but it’s got to be large given the amount of federally required payout they must make every year. And that payout will go from about $1.5 billion to about $3 billion. And that requires very large grants.

VIGELAND: What are some of the specific challenges that the Gates Foundation might face?

LIGHT: Well, I mean, I think they are moving very quickly to address some problems that just can’t wait — like global hunger and disease. So, they’re very impatient, which is a good thing in philanthropy. They’re not conservative in terms of making grants. So the vulnerability comes from the need to put in place oversight mechanisms and deal with the extraordinary pressure in some of the countries they’re working in to deal with and clean up corrupt delivery systems.

VIGELAND: When you have a gift of this size that comes in the door . . . as you mentioned before, there are IRS rules that say a certain amount of that has to go out the door very quickly. How does an organization like the Gates Foundation ramp up for that fast enough?

LIGHT: Oftentimes what a foundation will do is just double what it’s currently doing — increase the size of the grant. And that’s what you tend to see in foundationland. That large, short-term payout increases result in very fast grant making that either increases the size of the average grant or that involves special capital investments in buildings, mortar and bricks that you might not have seen before. I don’t expect, given the grant-making areas of the Gates Foundation, that you’re going to see a dramatic increase in bricks and mortar funding. What I think you’ll see is more of a focus on institution building. They’re dealing with nonprofits that are often young and not quite well-developed. I think they’re going to have to spend more time working on infrastructure, in this case administrative infrastructure, rather than bricks and mortar.

VIGELAND: So they would potentially be sending good chunks of money to the groups that are on the ground in the countries where they’re making these donations?

LIGHT: Right, and I think that eventually they have to confront the problem of government corruption in some of the countries that they’re working. They simply cannot succeed in getting their medicines and their aid down to recipients unless they have the cooperation of good governments. If there’s continued obstacles or if there’s continued corruption in governments with which they deal, they just can’t have reliable transfer of medicines and other goods.

VIGELAND: Paul Light is a professor of nonprofit management at New York University. Thanks for joining us.