High price of maintenance in Iraq

High price of maintenance in Iraq

KAI RYSSDAL: President Bush got a $66 billion pat on the back today. The Senate approved yet another emergency spending bill to pay for Iraq and Afghanistan. As politicians debate the cost of the war, Army mechanics have a grittier problem out in the field: protecting their equipment from insurgents and the elements. The Pennsylvania National Guard has been in Iraq for almost year. Ben Gilbert paid a visit to the troops who turn the wrenches.

BEN GILBERT: Chief Warrant Officer James Snook sits atop an Abrams tank and watches while another tank across the dirt parking lot kicks up an enormous cloud of dust. And it’s only backing up.

JAMES SNOOK: That is a maintenance disaster.

GILBERT: What are we seeing?

SNOOK: We’re seeing a cloud of dust so thick you can’t even see the vehcle that made it. And that’s normal, everyday operations.

Snook oversees the 1,800 vehicles in this brigade’s motor pool. He says dust, heat and the pace of operations makes it necessary to perform about twice as much maintenance as he would have to do back in the states. And it’s showing in the overall cost of the war: the US Army alone has requested $13 billion in this year’s budget for repair and replacement of vehicles.

Here in the maintenance yard, Chief Warrant Officer Allen Grenier says he can easily see why:

ALLEN GRENIER:“It’s just about after every mission they have to pull in, pull out their packs, blow out the air filters . . . Because they’re just covered with dust and a lot of dirt and grime. It’s about the worst environment I’ve seen as far as taking toll on engines. Because the dirt still gets into the engine and wears them out — in the tanks and the Bradleys and all that stuff. The heat really raises havoc with them.

Another problem, says First Sergeant Francis Forney, a senior non-commissioned officer in charge of maintenance in Ramadi, is simply the high turnover of soldiers. Every new batch has to learn to drive and maintain the equipment in the harsh environment of Iraq.

But driving around the base, the real danger is evident. Twisted Humvees lay in piles near the motor pool, their cabins blown apart like soda cans. Heat and grime may bump up maintenance costs, but insurgent attacks with improvised explosive devices, or IED’s, are still the main threat to both equipment and soldiers.

This brigade isn’t doing too badly despite the dirt, grime and attacks. Forney and his crew keep 97 percent of their equipment up and running. The standard for the Army is 90 percent. But Forney’s unit leaves this month after a year in Iraq and a new unit will then have to learn the maintenance ropes. 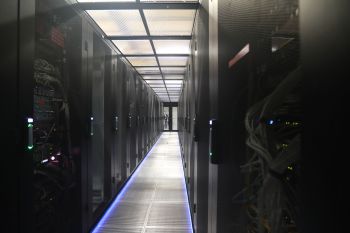