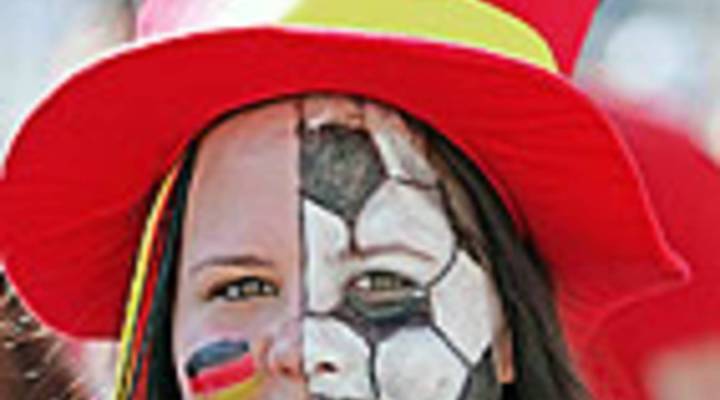 Nike looks for a new pitch

Nike looks for a new pitch

CHERYL GLASER: The NBA Championships and the Stanley Cup. That’s minor league stuff. The biggest sporting event on the planet kicked off in Munich today. Germany defeated Costa Rica in the opening game of the World Cup soccer tournament. Or futbol — as the rest of civilization calls it. The tournament’s held every four years. And it provides a global audience to advertisers and marketers. Not least of them, sports clothing and equipment makers. Adidas has traditionally dominated the soccer arena. But as Marketplace’s Tess Vigeland reports, Nike is making a bigger push than ever to win over the sport’s fans:

TESS VIGELAND: It was a good matchup today between Germany and Costa Rica — four goals to two. But the competition is even closer between the swoosh and the three stripes. Nike says it’s approaching $1.5 billion in annual soccer-related sales. Adidas is predicting around $1.54 billion worth this year.

RANDY BERNSTEIN:“It’s gonna be a dogfight, there’s no way to hold Nike back.”

Randy Bernstein is CEO of Premier Partnerships, a company that has worked with both Nike and Adidas as corporate sponsors.

BERNSTEIN:“Nike will and is presently competing head to head with Adidas. But the bottom line is Adidas products are loved and adored by the longtime soccer afficianados. Their parents and their grandparents all wore the Adidas boots.”

MARSHAL COHEN:“To the younger generation Nike has been on the soccer scene in some cases forever. So the younger the consumer, the more likely they are to look at Nike and Adidas on equal footing.”

Generations aren’t all that separates the two brands. Their marketing strategies are from opposite ends of the field. Adidas tends to partner with events and facilities. It has an exclusive deal for World Cup sponsorship through 2014. Nike promotes celebrity athletes and teams, including soccer powerhouse Brazil. Cohen points out that there will really only be one winner in the sporting goods game: the company that sponsors the World Cup winner.

COHEN:“That’s the brand that’s gonna be featured in the iconic picture that’s gonna be plastered on the front cover of every newspaper worldwide. You wanna be in the game to get that one shot that captures the world.”

And hopefully . . . the world market.