SCOTT JAGOW: A reporter for CBS news is in critical condition at a Baghdad hospital this evening. Kimberly Dozier’s convoy was hit with a roadside bomb today. Two of her colleagues, a photographer and a soundman, were killed. Of the soliders injured in the war, some 400 of them are amputees. The military spends millions of dollars on prosthetic care: computerized knees, legs, arms. But here at home, many civilians can’t get the same care. . . or leg. Ann Heppermann reports.

ANDREW GILLESPIE: They couldn’t safely remove the tumor, so the best medical based decision was to just go straight for an amputation.

Doctors removed Andrew’s leg above the knee. He had to learn walk again on a prosthestic leg. His first leg, which the insurance paid for, didn’t work for Andrew.

ANDREW: I would fall all the time on it. I probably fell two, three times a week.

So his doctor then prescribed a computerized leg, also known as a C-leg. But the family’s insurance company wouldn’t pay for it.

ANDREW: I had no idea that the insurance companies were going to be so difficult to work with. You know when they have something that can really improve your quality of life, it seems like it doesn’t really matter how much that should cost.

The leg costs about $40,000. Andrew’s family had to take out a loan to pay for it. It’s high tech, using sensors and algorithms to predict a person’s stride. The C-leg made Andrew’s life almost normal again. But the struggle’s not over.

MARY: If I could spare another mother somewhere from having to go through this difficult situation, then it will all have been worthwhile.

Andrew’s experience getting a prosthetic would have been different had he lost his leg in Iraq. C-legs are standard issue for injured soldiers at Walter Reed Army Medical Center in Washington, D.C. Pretty much all amputees have one. Lance Corporal Kade Hinkhouse does. Before the Iraq war, the 20-year-old played football for his high school team — the Burlington Cougars. Now, he sits in a wheelchair in one of the therapy rooms.

KADE HINKHOUSE: I was in Iraq and we were making a drop for the snipers and on the way to the drop a dual-stacked IED blew up. It killed the Marine next to me and it took off my right leg above the knee. After that I don’t remember because I was knocked unconscious.

When he woke up, Kade was an amputee. Doctors removed his right leg just above the knee, plus part of his skull and brain. The left side of his body shut down.

KADE: It took me a week to learn how to close my hand into a fist.

Kade works with a team of doctors and therapists almost daily.

THERAPIST: Let me see a fist.

At Walter Reed, patients get constant care. Everyone seems to have at least one C-leg, sometimes even two. But the atmosphere is surprisingly upbeat. People cheer each other on. Kade and his therapist, Christy, joke around.

And visitors from rock stars like Aerosmith to therapy dogs stop by to cheer up the soldiers.

Kade’s recovered quickly. He walked again for the first time this February with help from his prosthetis.

Mike Cochran makes artificial limbs. He says when you’re a prosthetist, you’re with a patient for life — refitting them, tinkering and tweaking components and sockets. Right now, Mike’s in the prosthetics lab, which is like a workshop for limbs. He rifles through a set of plastic bins filled with artificial arms and legs stacked all the way to the ceiling.

MIKE COCHRAN: Well, each patient has components in boxes. And this patient has new feet. These feet are going to allow her to wear high heels.

At Walter Reed, it’s not uncommon for an amputee to have two prosthetic legs or different sets of feet. Mike says patients have what they need to recover quickly. He attributes the success partially to their discipline as soldiers, but also thinks it’s the care they receive. Mike also works with amputees in civilian hospitals. He claims that things are different for patients under the care of private insurance.

MIKE: It’s terrible to become an amputee with private insurance because some of them pay for one prosthesis in a lifetime. Some have a cap of $1,000 that wouldn’t even pay for the liners, the interface between the body and the socket.

One of his patients at Adventist Hospital is Eugene Poe.

Mr. Poe has diabetes and lost his leg over two years ago. His insurance company paid for a leg, but nothing else.

MR. POE: The leg had shrunk, but yet I couldn’t get anybody to make a new top, so I just had to wear like 12 pairs of socks to build up the difference.

Mr. Poe isn’t the only patient Mike has seen struggle with private insurance. He’s worked with amputees who’ve had terrible falls as they waited for a prosthetic and then had to have more of their leg amputated.

MIKE: We’ve seen patients. . . . a 19-year-old motorcycle accident. They discharged him from the hospital two days after amputation. He’s in a nursing home with 90-year-olds.

These experiences have made him jaded.

MIKE: The problem with insurance is, they’re not a charity. They’re not in it for the care to people. They’re in it to make money to satisfy their shareholders.

And some who think the way Mike does want to change this. The Amputee Coalition of America is a non-profit group working for amputee rights. Paddy Rossbach is the executive director. She says the group is going state by state, lobbying for a law requiring insurance to cover prosthetics.

PADDY ROSSBACH: So there will be no restrictions as long as it is prescribed by a medical doctor and the most appropriate prosthesis.

The bill has already passed in Colorado, New Hampshire and Maine. But the health insurance industry believes these kinds of laws are the wrong answer. Susan Pisano of America’s Health Insurance Plans says they amount to mandates, and make health care unaffordable.

SUSAN PISANO: The weight of these mandates has made it impossible for some employers to be able to afford to provide health benefits at all.

Instead, Pisano says what the industry needs is more research.

Andrew Gillespie and his family lobbied their insurance company for months, before recently learning they would be reimbursed for his C-leg. Prosthetist Mike Cochran says his civilian patients learn how to wait. In an examination room, Mike adjusts Mr. Poe’s foot.

Last year, Mr. Poe became eligible for Medicare and the program paid for a computerized leg. He’s walking much better now. But in Mike’s opinion, it’s taken too long.

MIKE: Where he’s at now, he should have been two, three years ago. So he’s basically wasted these years.

And now, Mr. Poe is back at work, driving his cab.

MR. POE: As long as you stay out working, keeping your mind and body going, you’ll be all right. 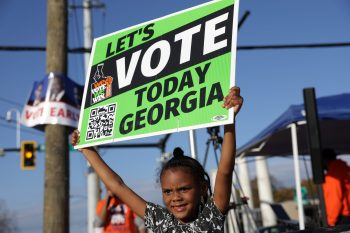 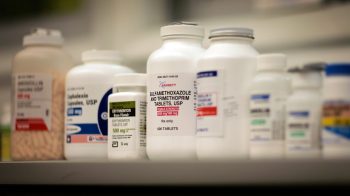