ELEANOR BEARDSLEY: A steady hum fills the classroom as 75 students try to follow a series of formulas tapped out across the blackboard by silver-haired math professor Nichole El Karoui.

El Karoui is teaching stochastic calculus. It works something like this: mathematicians use equations to predict outcomes over time in a random and tumultuous environment. Her students need to know this to earn what’s now called the El Karoui masters degree in probability and finance.

Understanding stochastic calculus is the lynchpin for mastering the increasingly profitable world of derivatives trading. That’s why investment bank recruiters are on the prowl here for graduates who understand derivatives — also known as quants. Derivatives traders have to know how to leverage their bets massively and quickly, profiting from minute changes in the price of bonds, stocks and commodities.

Twenty-five-year-old Jeremy Eau has already been hired by JP Morgan in London. El Karoui’s name on his resume made the difference.

JEREMY EAU: Yeah, it’s definitely something recruiters look for. In the quants world it’s more and more sophisticated in terms of mathematics. So I think the competitive advantage we have here is it’s very up to date. She has invented many concepts. She explains all the different products that are traded in the market and also that are developed by her.

By the time El Karoui finishes her class, her black suit is covered in chalk dust. When she heads into the hallway, students surround her like paparazzi, peppering her with questions.

El Karoui’s academic career took a financial detour two decades ago when she did a six-month internship in the research department of a French bank. There she stumbled upon the newly emerging, highly complex world of derivatives. She devised mathematical models now used by her colleagues in the financial world.

NICOLE EL KAROUI [voice of interpreter]: It’s clear that if the tools of differential stochastic calculus had not existed there would be no financial risk industry today. No one would have imagined that this math, which made its debut in the 50s and 60s, would be at the base of financial markets.

France, the land of Pascal and Descartes, has a strong tradition in the study of mathematics. Many say this has helped the French corner the market on derivatives. Ryan Taylor, a London-based headhunter for derivatives traders, says El Karoui graduates have a near monopoly on jobs in European trading rooms.

RYAN TAYLOR: The French education system, especially El Karoui, is very geared toward the practical side of quantitative analysis. And I think until the other universities in England and other areas of Europe, until they catch on to this, I think that top French graduates will continue to dominate the London marketplace.

In Paris, the derivatives trading room of French bank Societe Generale is full of El Karoui protégés, like Arnaud Serfati. Serfati, now head of the bank’s exotic products trading team, says with El Karoui graduates you know what you’re getting.

ARNAUD SERFATI: If you want to be able to value or assess derivatives, you really need to have a huge mathematical background — in order to understand the model. This is the only training you have for capital markets with a huge focus on derivatives. I mean this is the best in France and in the world. I can be sure of this.

Academic purists accuse El Karoui of abandoning research for the lucrative world of derivative trading. But she shrugs off the criticism.

Today, she is celebrating with her class. No job insecurity here. Her students have a rich array of new job offers and internships that will help put them on the path of defining the world of high finance. 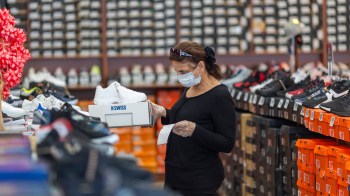 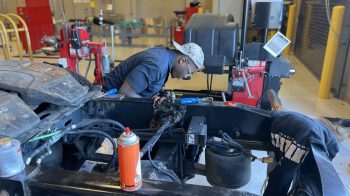 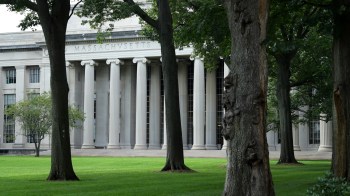