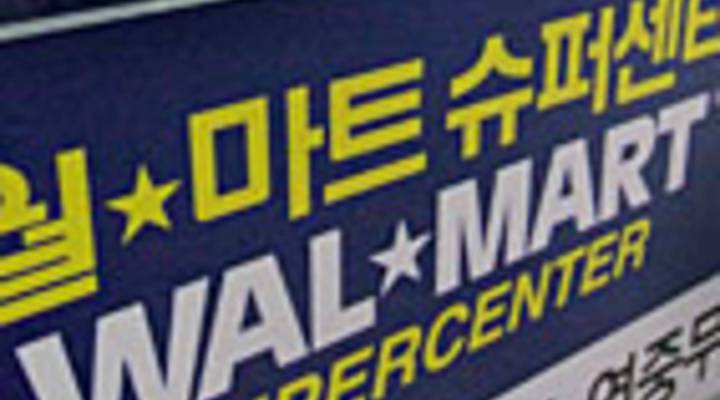 KAI RYSSDAL: Bad day for Wal-Mart, too. The world’s largest retailer lost a little bit of the world’s market share today. Wal-Mart’s leaving South Korea. It’s selling everything from inventory to the shelves stuff is stored on to the country’s biggest chain for $882 million. The 16 Wal-Marts in South Korea tallied a collective $10 million loss last year. A rare retailing defeat for Wal-Mart. Marketplace’s Tess Vigeland looks at why things went south.

TESS VIGELAND: Discount stores are a $22 billion industry in South Korea. Wal-Mart’s been a part of that scene for almost a decade. But it’s only generated 4 percent of the business. Compare that to the US, where Wal-Mart is responsible for 8-to-10 percent of all retail sales.

BILL WERTZ: Korea is a very competitive market and a very expensive market, so it was difficult for us to achieve the return on investment. We feel that we can take the investment that we had in South Korea and put it into other growth opportunities elsewhere around the world and do better for the company.

Not just around the world, but specifically in the region. Wal-Mart has steadily increased its stake in Japanese discount store Seiyu. And then there’s that other neighbor to the north.

Raphael Moreau is a retail analyst with Euromonitor International in London:

RAPHAEL MOREAU: They see better opportunities for growth in other Asian markets and especially in China because it is a market that is not so mature yet.

In other words, there’s not as much competition there . . . yet.

WERTZ: I’m sure we made mistakes as every retailer does. But I don’t think there was any single factor that made the difference for us.

The French retailer Carrefour had similar problems and announced just a month ago that it was pulling out of the country.