Not a happy deal at Northwest

Not a happy deal at Northwest

CHERYL GLASER: Northwest Airlines and its ground workers reached a tentative contract agreement on this Friday, November 19th. Bankrupt Northwest is looking to cut $1.4 billion in annual labor costs. And this deal would move the carrier one step closer to that goal. Now the question is — will the rank and file give the deal a thumbs-up? Marketplace’s Hillary Wicai reports:

HILLARY WICAI: Leaders for the International Association of Machinists and Aerospace Workers don’t like the proposed agreement. But they’re sending it to their 5,600 baggage handlers and ramp workers anyway because they’re between a rock and a hard place. A bankruptcy judge was just hours away from possibly throwing out the union’s current contract and letting the company call all the shots. IAM district president Bobby DePace is begrudgingly recommending that his members ratify the deal.

BOBBY DEPACE:“They do have to vote if they want to keep their jobs. That’s what this vote is all about. It’s not about the contract because it’s not good. It’s severe pay cuts, you have to pay for insurance.”

So at the same time the union is also taking a strike vote. The pilots’ union has already reached an agreement and the flight attendants are currently voting on theirs. But both are contingent on the ground workers’ agreement. Aerospace consultant John Walsh says it’s a tough time for labor in the airlines.

JOHN WALSH:“This is a union that has a lot of money, power and clout. Whereas they could whip managements into shape this bankruptcy provision has taken a lot of wind out of their sails.”

But bankruptcy can’t protect Northwest from everything. Airline analyst Robert Mann says it’s gonna be a long hot summer given the price of fuel.

ROBERT MANN:“All those DC-9s that are low cost of ownership aircraft but very high cost in terms of energy consumption.”

If only the bankruptcy judge could help beat back oil prices. 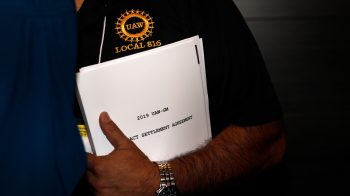