KAI RYSSDAL: With gas at three bucks a gallon, hybrid sales are booming. Even though they’re more expensive than regular cars, new hybrid registrations were up 139% last year. But there was a report today that American automakers don’t want them to become too popular. Unless they are the ones making the sale. From New York, Marketplace’s Bob Moon explains.

BOB MOON: President Bush has been complaining that Congress placed limits on the number of fuel-efficient vehicles eligible for big federal tax incentives, and he say the cap ought to be removed.

PRESIDENT BUSH: The problem is that these tax credits apply to only a limited number of hybrid and clean diesel vehicles for each manufacturer.

MIKE MORAN: I don’t think the legislators, nor did we, see that the government would be providing a never-ending incentive for people to try the vehicles. The idea is to move it beyond 2% of the market, which is what the hybrids are right now. It’s really a jumpstart.

But at the Union of Concerned Scientists, Don McKenzie contends the cap gives GM and Ford an unfair advantage, allowing them to catch up with their rivals. While Ford is turning out maybe 20,000 hybrids a year, for example, Toyota is selling close to 60,000-vehicle cap.

But Ford’s Michelle Bunker says the tax-credit cap was carefully crafted, and changing it now won’t be simple.

MICHELLE BUNKER: We would really want them to look at miles-per-gallon versus gallons-of-gas-saved and additional measures. We want to make sure that there isn’t an advantage to one company over the other.

Chrysler, by the way, has no official position. It’s still working on getting models that qualify for the tax credit on the market. 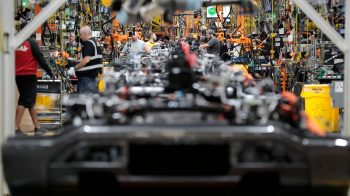